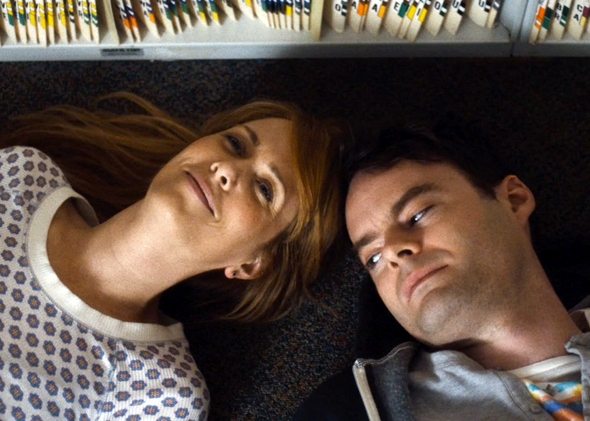 It has not always gone well when SNL stars go on to do movies.  For some reason Corky Romano is the first movie from this genre that comes to mind.  I think we can all agree that Chris Kattan’s attempt at becoming a leading man went poorly.  And then there are the based-on-SNL-characters films.  Those have done a little better than the original story lines, but then again there’s A Night at the Roxbury, not to pick on Kattan even more.  Point is, other than The Blues Brothers, SNL‘s ideas don’t translate well to the big screen, and often neither do its actors.  Now, stars can be born, Will Ferrell has had a great career, but it seems that especially comedies just don’t work outside the format of the show.  The Skeleton Twins is different.  It has nothing to do with the style of the program that launched Kristen Wiig & Bill Hader.  It’s a comedy perhaps, but a very dark one, a drama that relies on humor to keep audiences from getting totally depressed.  It’s a film that works because the actors in it are exceedingly talented, regardless of where they came from.

Siblings Maggie & Milo Dean haven’t seen each other for ten years.  Maggie is married to Lance, the nicest & most simple man on the planet, works for a dentist in her hometown, doesn’t have any kids, and isn’t very happy.  Milo lives in L.A., waits tables while he tries to become an actor, and has just attempted to kill himself.  Actually, Maggie was about to try the same thing, as the twins apparently share the same emotional stability, affected by a childhood that featured an unstable mother and a suicidal father.  Talk about heavy.  But when Maggie & Milo reunite, it’s possible that things might lighten up.  The two are connected by their past in a way that no one can understand, issues brought back to the surface by being together at home once again, where Milo crosses paths with his first love and Maggie battles with the idea of being a stable, married, monogamous housewife.  As their lives spin out of control, the twins will cling to each other as their only chance for survival and, just maybe, sanity.

Once the movie starts you forget all about SNL and realize that Wiig & Hader are simply great actors.  And not only that, but the chemistry they developed on the show followed them onto this set, allowing them to become a perfectly believable pair of siblings, complete with inside jokes and lifelong arguments.  A few unscripted moments, a musical number, Halloween costumes; it’s a wonderfully realistic imagining of what a normal brother & sister might go through, albeit told from an intentionally dark perspective.  And I can’t forget to mention Luke Wilson.  I have not seen him fill a role so absolutely in years, pulling out his best performance since The Royal Tenenbaums.  Lance is just so funny and so real, a guy that you can’t help but love, all the while wanting to kill him because he’s just so nice.  The trio worked well together in a way I didn’t expect, with Ty Burrell adding in another important character that gave the film even more depth.  The Skeleton Twins is a drama with offbeat humor and surprising heart, a story about loving your family and yourself unconditionally.