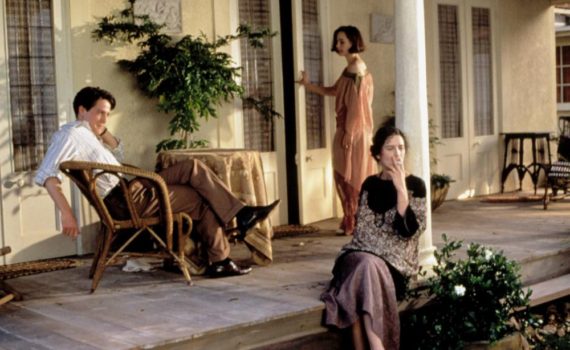 There is a lot more going on in Sirens than I noticed the first time I watched it.  To be fair, the first time I watched it I think I was more interested in seeing Elle Macpherson naked than in anything else, but I definitely failed to recognize the story for being as deep and metaphoric as it was, which is a shame.  Luckily, I gave the film another chance on a whim, feeling as if I might have missed something, and it turns out I missed a lot.  For one, Portia de Rossi naked.  Sorry, couldn’t help myself; while she does show some skin, that’s not what I’m referring to.  No, what I missed was the inspiration for the story and what it was trying to make us see, all while being disguised as a simple tale of hedonism in the bush, pun intended.  Sirens is simply more than meets the eye, which is not something every film can boast, and is reason enough to give it a legitimate shot.

A young English priest and his wife, on their way to their new parish in the outback of Australia, are called upon for a special assignment.  An art exhibit in Sydney is about to put up a new collection, but one painting among the group is being called heresy, for its depiction of a nude woman nailed to Christ’s cross.  The artist is no stranger to controversy, constantly pushing the boundaries of the provocative and the sexual, but this time the church thinks he has gone too far.  So on his cross-country trip to his new home, Father Anthony will pay Norman, the artist, a visit, to see if he can dissuade him front entering the alluring piece in the collection.  Anthony’s wife, Estella, is caught in the middle of the two men, or more specifically what they represent, as she begins to explore her own sensuality while guiltily fighting against the animalistic urges that threaten to open her eyes to a world she’s not sure she wants to see.

Going back to why I ever watched this movie in the first place, years ago, let’s touch on the sex first.  There is a group of models who live with Norman who pose nude for him and generally represent fertility, sexuality, freedom, temptation, etc.  They are played by Macpherson, de Rossi, & Kate Fischer, and they are all naked and hot and swimming and seducing and wonderful.  They are quiet literally Sirens of ancient lore, that’s their purpose, so they draw you in with their beauty and trap you inside the tale.  Sex is a major element of the plot; embracing your own ability to express yourself, allowing your own sexual awakening, so be prepared to have your boundaries pushed a bit, at least as far as a drama from 1994 pushes.  But the rest of the film is surprisingly solid, other than Tara Fitzgerald being an actress who isn’t up to leading a cast and the Sirens not having an ounce of acting talent between them.  Hugh Grant is charming in an early role, Sam Neill is always strong, and even Ben Mendelsohn makes a small appearance.  And then there’s the message, one of communication with your body and of understanding your surroundings, all set to an Odyssey-like narrative and against a lovely, wild, Australian background.  All in all, a better film than I once gave it credit for, a dated romantic comedy that bucks the genre, but one that isn’t directed or acted well enough to call great.