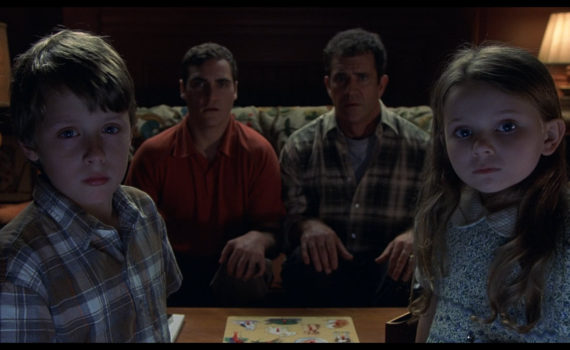 Signs still scares me every time I watch it; if that’s not the ultimate compliment for a horror movie then I don’t know what it.  It terrified me in the theatre, it gave me nightmares, made me afraid of corn, it just generally messed me up, and it remains one of the most gripping alien movies I have ever seen.  Not only did Shyamalan bring his style to a well-worn genre, he also did that genre justice, giving sci-fi/horror fans what they wanted while also entertaining a whole new audience.  Signs is where this excellent director finally hit his stride, and it remains near-perfect nearly twenty years later.

In a small, rural town outside of Philadelphia, strange crop circles begin appearing within local farms.  At first, it’s seen as a hoax, until those same signs begin popping up all over the globe, and until hovering spaceships begin condensing over cities across the world.  We’re not alone, but whether the visitors are friendly or hostile is unknown, although the fear they spark is real either way.  For the Hess family, who recently lost their wife and mother, the aliens represent another cataclysmic event that they are not prepared to deal with, as the father (who was once a Father) battles with his faith amid what seems to be a very clear message; God is not there to protect you.

It’s not just the scares that make Signs such an excellent film, it’s the precise and caring way it’s developed, every single character having a role, a voice, a place, and a purpose.  Shyamalan wrote a wonderful screenplay, full of messages and, yes, a few twists, but mostly he was simply telling us a story, one that he took the time to get right.  With that comes a mood that is only produced once a decade, an overpowering presence and fear that make the film come to life in a way that you wouldn’t believe possible.  With Sixth Sense and Unbreakable, Shyamalan was simply getting started, and Bruce Willis isn’t the greatest actor; Mel Gibson is, and Joaquin Phoenix is even more talented, which gives the movie the support it needs to soar the entire way through.  Spectacular music, a captivating backstory, a condensed set, an amazing eye for detail; Signs is Shyamalan’s best work by far, and it hasn’t grown weaker with time.