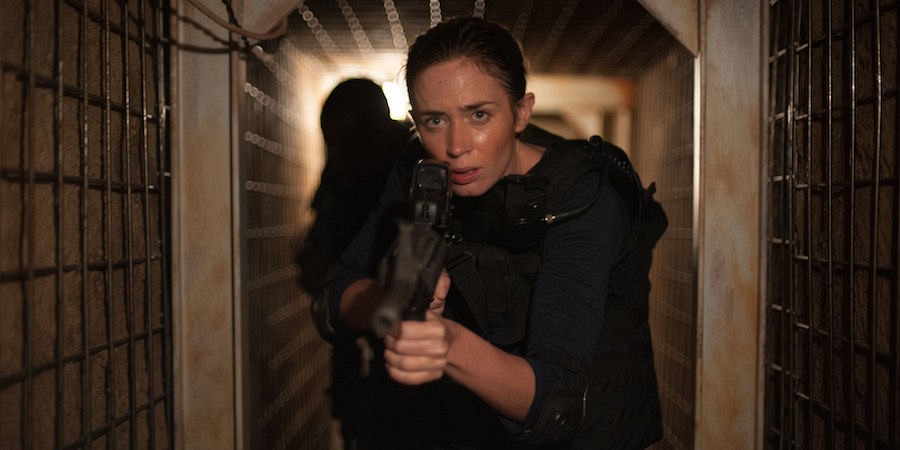 Crime thrillers are known for their action, not their visuals, and yet director Denis Villeneuve delivers both in Sicario, hopefully creating a brand new genre that audiences would be lucky if Hollywood were to copy.  As Ex Machina did for sci-fi, as Fury Road did for adventure, Sicario does for CIA drama, succeeding where so many others have failed, brightening a style that had become dull, and showing us all how movies can & should be made.  2015 has been a great year for re-imagining the norm, and it’s nice to see yet another director raise the bar.  Villeneuve is riding a recent surge of strong projects, with two solid 2013 films: Prisoners and Enemy.  Prisoners is both unsettling & terrifying; elements that are found here as well.  Enemy was complex and fascinating; again, visible here.  Sicario becomes a combination of the two; an intense thrill-ride with buried roots, a story that will shock you with the truth.

Kate Macer is a FBI agent from Arizona who specializes in the recovery of kidnap victims.  Her latest mission leads to the accidental discovery of drug trafficking activity in her city.  Drug lords in Mexico are shipping product across the border, creating violence on both sides, and upsetting the balance of the status quo.  And so a special team is coordinated to take down the cartel in Juarez, with Macer added as a special inter-departmental liaison.  The team is headed by Agent Matt Graver of some unspecified department.  Also along for the ride is Alejandro, a man who no one wants to claim, but who seems to call the shots.  Kate is in way over her head and doesn’t understand the undercurrents of a war that has been waged for decades with no quarter from either side.  She will have to follow orders if she wants to make a real difference in this battle, even when those orders break the very law she is sworn to uphold. Kate is the perfect vehicle for audiences to ride in as this story unfolds.  She’s confused, helpless, surviving the best she can, and ultimately a cog in a machine that’s beyond her understanding.  Alejandro tells her at one point that explaining the entire situation would be like explaining how a watch works, that for now all she can do is keep an eye on the time.  A point well made, and this film lives that message, as audiences are only told what we need to know when we need to know it, never grasping the enormity of the plot until the end, and by then it’s too late to do anything about it.  We are Kate, floundering in rough seas, trying to live another day, hoping that we’re doing the right thing.  Villeneuve weaves the plot seamlessly, with moments of action, humor, and humanity wrapped tightly around the central theme of crime, justice, and redemption.  It’s a wide step above the typical CIA thrillers that have plagued us for too many years, elevating the genre to somewhere both higher & more massive, giving the normal plot both more clarity & more depth.  Add in some of the best cinematography you will ever see on screen, shot after perfect shot of dark intensity, and Sicario becomes the ground-breaking film that we hoped it would be.

If I had one criticism is would be Emily Blunt.  After such a wide-spread movement of feminism in Hollywood, we’ve become almost used to the idea of a strong leading lady.  It’s shocking that this is something we’d need to get used to, but it’s the reality of the situation; women were given incredibly inferior roles for an incredible amount of time.  That seems to be changing, and I thought Blunt’s character would be another example of that change.  But while she’s a bad ass in so many ways, she’s also the only woman in the movie, the only character who’s always unsure, the only person who seems to get scared.  That made her the perfect vehicle for the audience, as I said before, but that didn’t push her toward controlling the situation as much as the modern actress seems to be doing in today’s films.  Small criticism perhaps, but something I noticed.  Something else I noticed; her hidden accent.  It wasn’t an issue in Edge of Tomorrow, but here I could hear her British accent underneath her dialogue and it bothered me.  Thankfully, nothing else in the movie did.  Del Toro was amazing, Brolin has perhaps never been better, and Blunt herself was terrific in the part; I don’t mean to infer that she wasn’t, it was the part itself that surprised me with its lack of heroism.  Sicario is better than what we’ve been seeing from this style.  It might lack heart or that special pull needed to make you fall in love, but that doesn’t stop it from being one of the year’s best films and something we’ll be talking about come Oscar season.