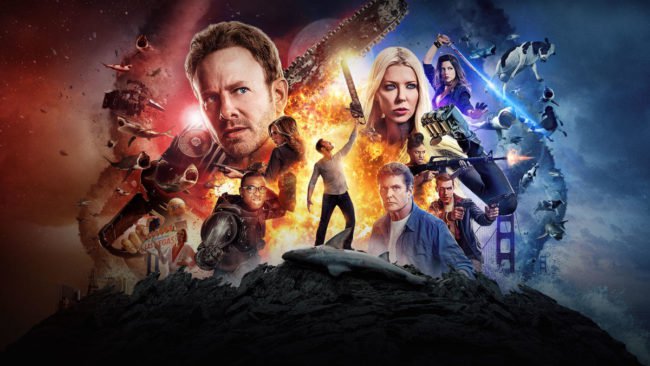 Sharknado is probably the worst movie I have ever seen.  Sharknado 2: The Second One was slightly better, maybe the Bottom 10 all-time, but only because it was also worse in many ways, going further over the top than anyone ever thought possible.  Sharknado 3: Oh Hell No! proves us all wrong, the franchise can get more ridiculous, and the sky is by no means the limit.  And now we have Sharknado 4: The 4th Awakens, a parody within a parody franchise that has gotten so far out of control that it’s circled back around, arriving at the terrible place where this all began, with a movie that couldn’t possibly get worse.  I have to imagine that if they make any more of these films the world might explode.

It’s been five years since the last sharknado, a technology company constructing a series of stations that can blast them apart before they form, actually coming in handy against regular tornadoes too.  For Fin Shepard, life has been bittersweet; no sharknadoes, but no April either, as she was killed at the last second on their last mission to save humanity.  He’ll try to get over her death with the help of his kids, but it won’t be easy.  Well, off to Las Vegas for a party & to meet up with his son Matt, a reunion that will, incidentally, take place on the top of a hotel with numerous killer sharks swimming around in a pool.  And when an unbeatable sandnado starts up, collects all the sharks, and begins depositing them around the U.S., Fin is back on the job, this time fighting a morphing sharknado that seems to have a life of its own.

To say that it’s worse than Sharknadoes 2 & 3 is truly an insult, but one warranted here.  The fourth installment has lost its mind and we are all its victims.  Lavanadoes, lightingnadoes, firenadoes, nuclearnadoes, cownadoes; I’m not making these things up, that was somebody else’ job.  To even begin to figure out the plot or the reason literally anything happens would be an exercise in futility.  Instead, let’s just focus on the cameos, which are why people watch.  David Hasselhoff, Cheryl Tiegs, Gary Busey, Jillian Barberie, Dog the Bountyhunter, Stacey Dash, Gilbert Gottfried, Lori Greiner, Robert Herjavec, Steve Guttenberg, Wayne Newton, some old Baywatch babes, Al Roker, Paul Shaffer, Carrot Top, Brandi Glanville: I’m actually surprised I wasn’t asked to be in this movie, looking at this list.  It’s a joke that’s gotten old but to which we still listen; maybe four was enough and it’s finally over, but I doubt it.