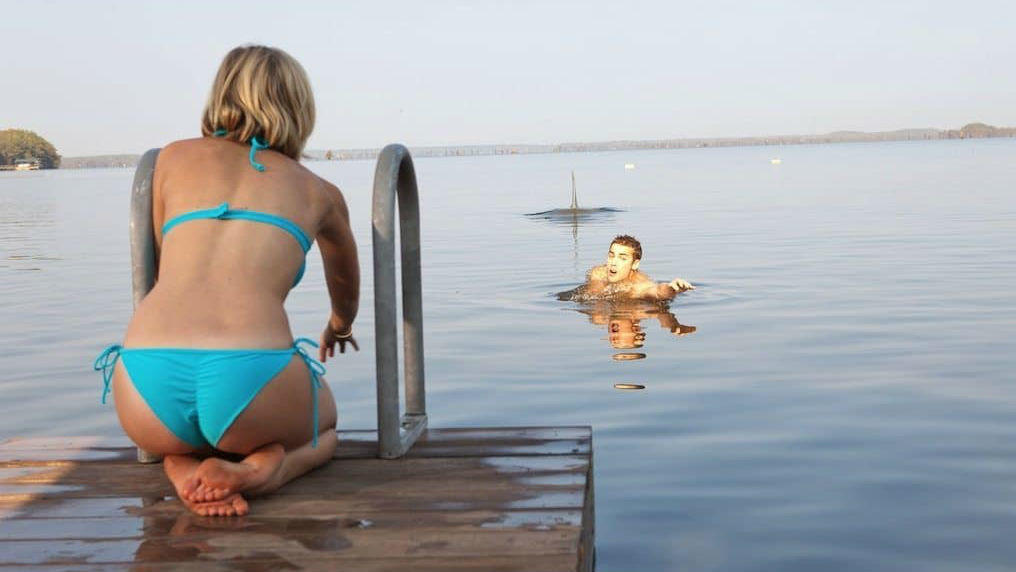 From the director of Snakes on a Plane comes Shark Night, and that’s no good thing.  Obviously, coming in you know you’re in for something terrible, it’s just a matter of asking yourself if that’s what you secretly want.  Shark Night is a cross between genres, a cabin-in-the-woods type horror flick with a creature-feature element that ups the gross out factor, which are both styles that I have enjoyed in the past and don’t mind indulgently enjoying again.  It really comes down to how much you can stomach, cause there’s a lot to force down here if you make the commitment, ranging from the ragged flesh to the ragged acting; in this case I’m not really sure which was worse.

Taking a break from studying for the weekend, a group of college kids from Tulane hit the lake to do some boating, some drinking, some flirting, and at the very least some relaxing away from all the stress of school.  Sara is a quiet hottie, Nick is the nerd in love with her, Malik is the hunky jock, Maya is his girlfriend, Blake is a self-absorbed man-candy, Gordon is the slacker, and Beth is a girl who just wants to get drunk & naked.  Sounds like a good time for all, except that for some reason there are sharks in the water, and they seem to want to eat our partying party, which really gets in the way of beer pong.

It’s dumb, because of course it is, but there are a few nuggets to enjoy if you’re looking to completely blank out and have a gruesome good time.  The story is classic, the youngsters far enough out that their cell phones don’t work, and the twist is actually OK, if you don’t look at it too hard.  The pretty people are very pretty, there’s plenty of skin if not outright nudity, you get to watch some fun shark biting, it’s over-the-top but not so far gone that it’s a complete joke.  But still, it’s not like this is fine dramatic work.  The acting is painful, the decisions dumb, each scene only existing to move us along to the predictable ending, but hey, at least we get to see people in bikinis along the way.  If you’re not looking for anything more than a low-inspiration horror/thriller/creature feature, than you’ve come to the right place.