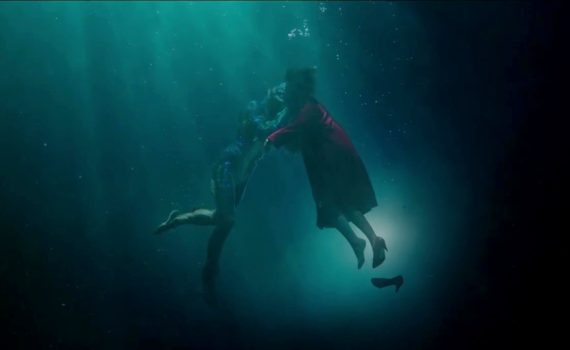 A favorite to round out the Best Picture category at this year’s Academy Awards, if perhaps not poised or projected to win, is The Shape of Water, the newest film from visionary director Guillermo del Toro.  The term ‘visionary’ is thrown around like a Frisbee, but every once in a great while it lands in the perfect spot, and I know no other filmmaker that deserves the label more than this man.  He has created some of the most unique cinema of the last 15 years, and for that he has earned an over-used title and much, much more.  Hellboy, Pan’s Labyrinth, Pacific Rim, Crimson Peak, also writing the Hobbit films; I don’t actually love all his movies, but they stand out among the crowd, especially for their use of creatures.  Del Toro creates these wonderfully beastly characters, weaves them into a human storyline, and asks you to tell to difference, a trick he pulls one more time here, to solid success.

Eliza is an orphan who is now grown, lives in Baltimore, and cannot speak.  Injuries suffered in her childhood have made her mute,  she lives alone, her best friend is an artist from across the hall of her apartment, which is above a theatre, and she works in a military installation as a cleaning lady.  She enjoys routine, music, movies, the rain, her coworker Zelda’s company, and if she’s a little lonely, her life isn’t so bad that she’d complain about it.  Eliza is an invisible worker while government scientists do their jobs around her, and one day she sees a new asset to the lab, a creature who lives in the water and who is being held captive against its will.  She empathizes with this animal, this being that can’t talk but would have so much to say if it could, and she vows to save if from the experiments of the facility, even though the danger of helping it escape will be unimaginably great. The Shape of Water could be considered a healthy nomination for a handful of Oscar categories, although I can’t quite see it as a favorite to win any.  Like I said, it might make it on the Best Picture list, it’s definitely an extremely imaginative piece of art.  Sally Hawkins might deserve a Best Actress nod, as she pushes the boundaries in shocking ways in this film, and always brings a stellar performance to everything in which she appears.  Michael Shannon as the villain of the film looks primed for Best Supporting, which shouldn’t be a surprise, as everything he touches turns to gold.  And even the score was magnificent, a classic composition of movie music if ever there was one.  I’ve heard this film called ‘Amelie meets the Creature from the Black Lagoon’, and although Hawkins is English, not French, I get the picture, and it really could be seen as equally bizarrely beautiful as that iconic Audrey Tautou masterpiece.

I’d like to stop just short of calling this film magical, however, for as much as the idea blew me away, actually and physically sitting down in front of a screen and consuming it was a slightly different experience.  It is powerful, it is original, it is a risk, which are all things I applaud, so I don’t want to take away too much from my praise of the project, I just didn’t find the movie-watching to be as delightful as the movie-imagining.  I felt like the pace dragged a bit in the middle, when Act I gave way to Act II and the love story emerged with a ferocity that I just didn’t feel was warranted by the marginal chemistry developed at the beginning.  Also, I didn’t love the side characters played by Michael Stuhlbarg and Richard Jenkins, as much as I love those actors in other roles; I felt like the Russian element and the equal rights element were thrown in rather hurriedly without much thought.  I’ve never actually adored a del Toro film, as much as I respect his abilities, so perhaps it shouldn’t be a surprise that I really liked his latest, wacky, wonky fantasy fable, but I just couldn’t find it as amazing as I’d hoped.  I almost feel like I need an immediate second viewing to see if there were things that I missed, parts I was too distracted to enjoy, or reasons to get more firmly on board.