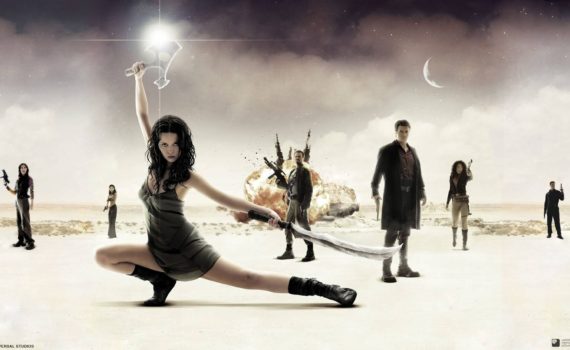 Serenity is the followup film to the cancelled TV series Firefly, which became a cult classic after it was taken off the air.  They had to do something to put a bow on the story that so many enjoyed, even if it was too late to bring back the show that so many loved.  It was a great concept and a perfect cast; I think it just took too long to come together and for some reason audiences were hesitant to buy in.  If you actually watch the entire 14 episodes, I’m not sure how you can withhold your love; it’s a plot that really sucks you in with a cast of actors who wouldn’t go on to do anything else, but who work together for some inexplicable reason here.  Serenity gives us a bit of closure, and for that I will always appreciate it, even if it isn’t the best stand-alone flick.

The crew of Serenity is still on the run, dodging the Alliance, picking up odd jobs, trying to stay alive.  But while on a distant planet, River is triggered by a subliminal message, and what happens next is shocking.  Apparently whatever those scientists did to her brain when she was a captive turned her into the ultimate weapon.  She can fight anyone, as well as basically read minds, so she’s both a danger to everyone she meets and something that needs to be kept away from Alliance hands.  Mal and his crew will keep River alive and free, but the cost is that they are hounded by a violent Operative, a man who will stop at nothing to take the girl back, including murdering anyone who steps in his way.

The movie is much more kung fu fighting than the show, which is a little odd to watch, but also understandable.  Whedon was trying to be cool, it was what was in style, he wanted to end with a bang; I can forgive the excess of kicks & punches.  The real reason to watch is the same reason we watched the show; the characters are just so adorable.  You want Kaylee and Simon to hook up, you want Inara to confess her love for Mal, you want to find out just what is inside River’s brain.  The film doles out answers and kills off a couple characters; it does exactly what it needs to in order to shut the door.  If you enjoyed the show you’ll be entertained by the movie; just know that the style is a little more action-packed and typical, but it still giving fans what they want.