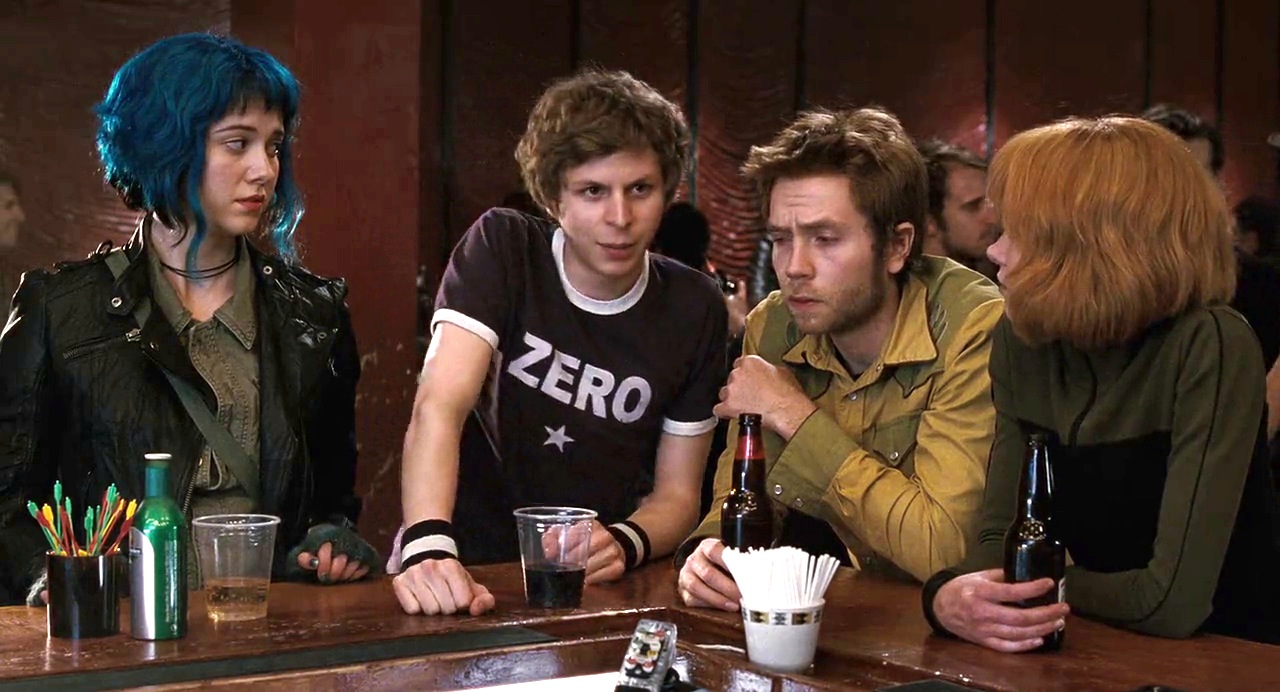 Scott Pilgrim may only have come out 10 years ago, but it feels far more dated than that, like a Kevin Smith movie from the 90s that’s only really applicable to the teenage dudes who were watching then, who were seeing themselves and their own weaknesses in the forms of the main, always-male characters.  I don’t mean to imply that I wasn’t one of that number, because I sure was; angsty, angry, conceited yet unbelievably insecure, ready to guffaw at the cheapest shots if I thought they were raising me up and putting anyone else down.  I don’t mean to be above that, to judge that youthful rite too harshly, or to view this film through too modern an eye.  It’s just that Scott Pilgrim isn’t wonderful for everyone, it’s only funny to a very select few, and those few might not be the people we’d want to hang out with any more.

Scott is kind of a loser, if one that seems cool to a very specific group of guys and sexy to a certain type of fucked up girl.  He’s unemployed, lives in a bunker on a friend’s dime, is part of a rock band, can’t keep relationships straight, makes bad decisions, and basically sucks.  He’s lovable maybe, because he’s so bad at life, but that doesn’t endear him to the people he screws over, or to the girlfriends he leaves scattered behind him on his winding path toward …who knows.  Things could change for the better perhaps, Scott could change for the better, when he meets Ramona, the literal girl of his dreams.  But first he’ll have to face all of her evil ex-boyfriends, of which there are seven, defeat them to win her heart, and also find himself in the process, or risk losing the best thing that’s ever come his way.

Edgar Wright’s got his Simon Pegg/Nick Frost movies, those are good, he’s got Baby Driver, that was cool, but I think he missed the mark with Scott Pilgrim.  It’s a graphic novel, he wanted to bring it to life, that’s fine, but he’s almost too old to still be stuck in this fantasy world, where the nerdy guy gets the hot girl, where it’s cool to play only to stereotypes, where witty banter is all that matters, and rock is god.  I understand it just fine because I lived it, I immersed myself in it when I was 17, I can feel it perfectly, but it might not only be time for us to grow out of the phase ourselves but to admit that society as a whole has moved on as well; basically this shit just isn’t as funny any more.  This film feels juvenile, arrogant, self-serving, a little sexist & racism, egocentric at times, and simply off the mark.  Maybe I missed the boat, maybe I needed to watch this 10 years ago, but were those times so different from the current era?  Maybe Wright missed the boat himself, he needs to have made this movie in the punk window of the 90s instead, when its off-color comedy would have flown.  As it is, if you sat a diverse audience in front of it now, I bet there would be issues.  And I was really excited about this cast too, because it was stacked: Michael Cera, Mary Elizabeth Winstead, Kieran Culkin, Allison Pill, Aubrey Plaza, Jason Schwartzman, Johnny Simmons, Chris Evans, Brie Larson, Mae Whitman, Thomas Jane.  But they couldn’t win me over, not the with the content as laser-focused on the 20-something, skinny, white, Nintendo-loving, fantasy-reading male as it was; that was me for a time, sure, and maybe during that time I would have had a different opinion, but watching now I couldn’t conjure the same sympathy.