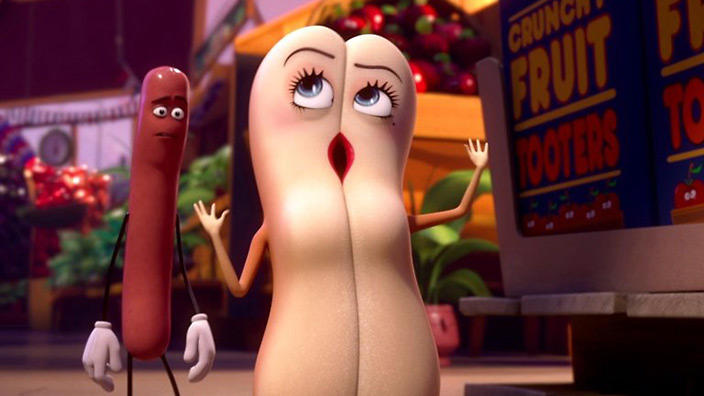 Whether you look at it as an adult version of Cloudy with a Chance of Meatballs 2 or a food version of This Is the End, you’ll walk out of the theatre after having watched Sausage Party slightly scarred.  This in-your-face comedy refuses to be kid-friendly, instead going for the record in how often a fruit can say fuck and how sexual you can make a taco that has no genitalia.  If you didn’t know or haven’t guessed by now, this film is R-rated, meant for grownups with sick senses of humor, and should not be attended with any parents who just want to come along because “that Jewish guy is pretty funny.”  Sausage Party is one giant insult, crass to the core, and uncomfortably animated.  It stereotypes, it grosses out, it pushes the envelope, it shocks, but it might also be the funniest film you’ll see this year.

Welcome to Shopwell, where every grocery item is fresh & ready for your choice selection.  Not only that, but they are eager as well, full of life and anxious to be chosen to leave through the giant front doors into a world that they can only imagine.  The food of Shopwell has created a religion of sorts together, singing songs about the glories of the Great Beyond, a place where nothing bad could possibly happen.  They have faith, though no one has actually been outside to know for sure, that the gods that select them only have each comestible’s best interest at heart.  But when a honey mustard is returned to the store, he preaches a horrible gospel; that death lies outside those doors, that the gods don’t take care of food at all.  A brave sausage, with his bun at his side, will go on a dangerous journey to find out the truth, meeting many foreign foods along the way, learning valuable lessons with every step. What shocked me much more than the raw sexual and 12-year-old boy humors of the film was its core message.  I don’t think it’s over-dramatic to say that the writers of Sausage Party had something they wanted to say very badly, choosing to voice it through animated food for humor’s sake but also to make it more digestible, pun intended.  The message is one religious viewers won’t like: that it’s stupid to believe in an imagined life that will be better than the one you’re living right now, especially when that imagining costs you your current pleasure & happiness.  Why wait to live, the gods aren’t judging you, they won’t reward you later, your life is now and it’s the only one you get.  Pretty ridiculous to think that this idea needs to be advertised at all, let alone in a Seth Rogen comedy, but from the start the film makes this concept a central theme, sticks with it throughout, and only backs off long enough to admit that calling zealots morons won’t solve the problem, that we need to love each other instead.  Heavy stuff.