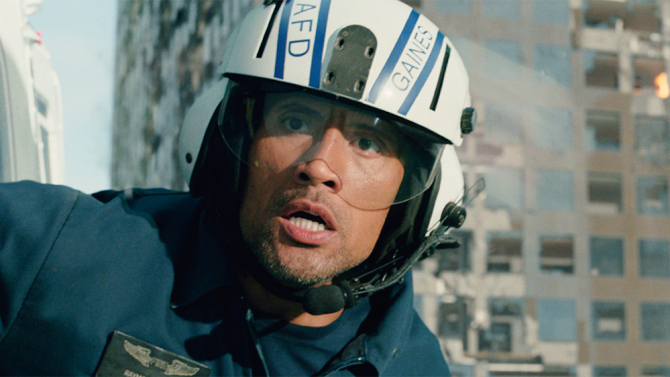 There are a couple different ways to make a successful disaster movie.  And by successful I mean quality, either in production or entertainment value.  I don’t care one way or the other how much money a film makes, I’m a critic, I’m not here to call a blockbuster a success because a ton of summer moviergoers were tricked into seeing it.  No, choose a path and follow it toward quality, that’s the key to winning my praise, for whatever that’s worth.  Path #1: create massive buildup and then let it explode in our faces.  That might sound dirty, but it’s effective.  Dante’s Peak, Deep Impact, The Day After Tomorrow; these movies take their time priming audiences for a massive event, giving us small tastes of action along the way, letting us feel the panic as the clock ticks down.  Path #2: go big, go berserk, and don’t look back.  Sharnado, 2012, Twister; these movies don’t hold the cheese, never lack in action, and can’t pause long enough to shout out an apology.  So my point is, make a choice, either go the Big Buildup route or go Over The Top, longevity lies along those two paths.  San Andreas chooses neither and ends up somewhere in the muddled middle, becoming a movie I think we’ll quickly forget.

Present day, California, following Ray the Rescue Pilot, saving the world one panicked coed at a time.  Ray is a family man, or was until his wife left him, but he still loves his daughter more than life itself and also loves his job as a helicopter search & rescue team leader.  So when disaster strikes the region in the form of earthquakes all along the San Andreas fault, Ray is there to help.  Experts are tracking the quakes, led by Lawrence & Kim, a pair of men who have just cracked the secrets of the plates and can now predict the intensity & location of these tremors.  But their initial warnings come to late and San Francisco is devastated by a terrible tectonic disaster.  Ray’s daughter Blake is in San Fran, trapped among the rubble, while Ray & his estranged wife are miles away.  But they’re on their way to the rescue, flying fast, knowing that another earthquake, bigger than the first, is on its way toward the Golden Gate, ready to rip apart a city and bust California wide open. The problems with San Andreas are in what it didn’t do.  It didn’t take its time, not at all, giving us disasters at the beginning, disasters in the middle, and bigger disasters at the end.  There was no pace to the action, never time to anticipate the climax, and a few weak attempts by the scientists to warn the public were given after the cities had been completely destroyed.  Basically, their job was to tell us not to leave the theatre, that more cool stuff was on its way, not to worry.  Shouldn’t the film have been able to tell us that by the structure of events?  Some previews, some deaths, a story, and then a big ol’ burst of exploding building and tidal waves that lasted an hour.  I’m not saying that would have made the movie perfect, but I’m a big believer in choosing a style & sticking to it.  San Andreas wasn’t cheesy enough to be called a spoof or a comedy, it wasn’t organized enough to be called a great film, and in the end felt more forced than anything else.

But perhaps the director couldn’t really fashion a convincing buildup story; he didn’t really have that much to work with.  The Rock was pretty terrible, and that’s not even a knock on the guy, he’s just not really a great actor.  He’s studly, bulky, seems nice, but can’t really convince me that’s he’s emotionally driven by the loss of his family.  And speaking of, man was his wife bad.  Carla Gugino, didn’t really know who she was, and don’t want to find out now.  She was so fake it hurt, which would have been fine if everyone around her was acting the same way, but I think they might have actually been trying.  Though not Paul Giamatti, he wasn’t trying, he was thinking about the money he made off this film & laughing all the way to the bank.  No, the acting was bad, the directing was bad, and the few moments that a thousand buildings weren’t falling over were so poorly executed that you couldn’t even call them laughable.  I don’t mean to bash the film entirely, especially since I’m about to give it an OK rating, but I wanted to make it clear that this film won’t become one of the disaster classics that we love, all the while knowing that they suck.  If the sound had been turned off, if I was just expected to enjoy the destruction and watch the people scurry around trying to survive, I think that might have made for an awesome time.  I’m serious, you’d miss absolutely nothing by taking out the audio, and perhaps I should recommend that audiences in foreign countries refrain from reading the subtitles or listening to the dubbing.  Because the action was cool, the deaths were numerous, the disasters were epic, and I enjoyed what I saw.  I just don’t think San Andreas did it right, it’s as plain as that, so I’m left having been fairly entertained but not at all impressed.