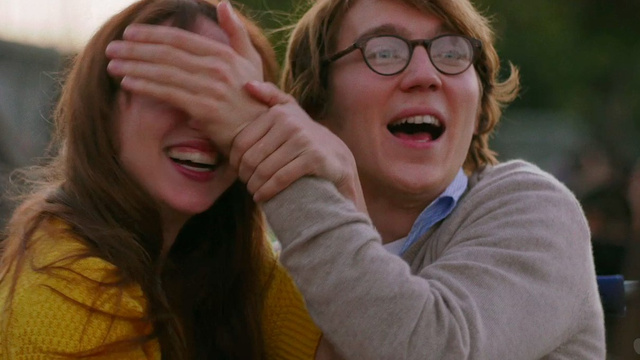 Zoe Kazan’s screenwriting debut, Faris & Dayton’s followup to Little Miss Sunshine, and Paul Dano’s resurrection after 5 years of bad roles, Ruby Sparks marks a pivotal point that, sadly, went mostly unnoticed and definitely underappreciated.  I missed it as it went by, even being a fan of this directing pair’s amazing ensemble piece, and of Dano’s work in There Will Be Blood.  Zoe Kazan I wouldn’t learn to love until later, but she’s now one of my favorite actors, and I hope she continues to write as well (her new film Wildlife is just coming out, review to follow shortly).  Incidentally, I watched Ruby Sparks in preparation for Wildlife; I wanted to see Kazan’s writing debut before I saw Paul Dano’s directing debut.  But if that’s too much information about actors and directors and writer and upcoming projects, let me make it a little more simple; Ruby Sparks is an excellent movie that I wish I had seen earlier.

Calvin is a writer who struck gold young, but who has been struggling ever since.  A book he wrote when he was 19 was labelled as a future American classic, he wrote some short stories in the time that followed, his fans still support him, the money is still there, but he’s been blocked from producing anything else of value, and he needs to find out why before he explodes.  Isolation, therapy, a dog; nothing helps, he simply can’t come up with an original idea, and he doesn’t know where to turn.  Inward might be a good idea, which is exactly what happens by accident one night when Calvin dreams of this perfect girl, this angel named Ruby who is everything he’s ever wanted from a partner.  Upon waking, he immediately begins writing Ruby into existence, but little does he know that she’s actually coming alive, and will soon be a real, red-blooded, human girlfriend living in his house with no knowledge that Calvin made her up.

I think the first thing we have to do is talk about how wonderful Zoe Kazan is.  As an actor, she’s been building pressure under our feet over the years until we can no longer ignore her presence: The Savages, Fracture, Revolutionary Road, Meek’s Cutoff, Ruby Sparks, The Pretty One, What If, In Your Eyes, The Big Sick.  She might make a misstep every once in a while (I didn’t list all the movies you’ve never heard of or that are plain bad), but every actor does, especially when they are willing to experiment, and she hits home runs more than she strikes out.  And now she’s writing, which is excellent, and now Paul Dano is directing, which is phenomenal, and also they’re a couple, which, I don’t know, I just find adorable.  But back to Ruby, which I think is simply radiant.  The plot is so fun, Calvin is so neurotic, Ruby is so magical, they play so well off each other, and the side characters are brought to life perfectly by Chris Messina, Elliott Gould, Steve Coogan, Annette Bening, & Antonio Banderas.  It’s a feel-good film, but one that’s also well-developed, has depth, and features a terrifying moment depicting the abuse of control one person can have over another, which is a sobering and necessary message.  I can’t wait for more from this pair; glad I don’t have to.