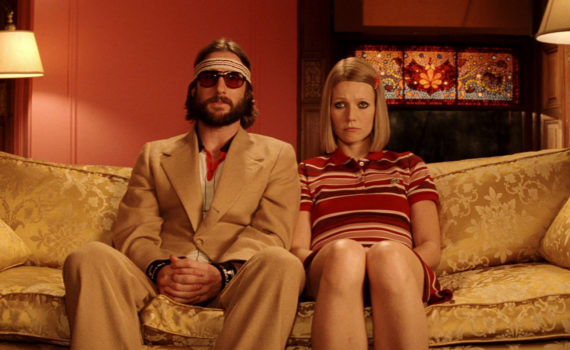 The Royal Tenenbaums is the best film I have ever seen, and therefor my absolute, all-time favorite.  I refuse to qualify that opinion too much, but I will say this; it was released at a very important time in my life, when I was cementing my taste in movies, and when I was going through a lot personally, so I understand how that can affect things.  But I still hold that it is an amazing cinematic accomplishment as well, something that should go down in the history books for its artistic originality and perfection of plot.  It was released in January 2002, just in time for the Oscars, but it received very little attention.  It was nominated for Best Original Screenplay, and Gene Hackman won the Golden Globe for Best Actor, but other than that it was mostly overlooked.  Fine by me, that just means that I can keep it a little more to myself, this wonderful story that washes magically over me every time I watch it, this beautiful experience that I’ll never forget.

The Tenenbaums are a family of geniuses, living at 111 Archer Avenue in complete dysfunction.  Royal is a lawyer, a crafty man, a self-described asshole.  Etheline is an archeologist, and raises their three children.  Richie is a tennis prodigy, Chas is a business tycoon in a child’s body, and Margot may be adopted but she’s also a talented playwright.  As the years pass, the family grows further and further apart, the parents separating and the children failing at spreading their proverbial wings to become the magnificent creatures they showed the promise of metamorphosing into.  When Royal, disbarred and living in a hotel, goes broke, he creates an imaginary illness so that he might have a second chance with his family.  They have all moved home to deal with their own personal tragedies, and so everyone finds themselves under one roof again, wallowing in self-pity and the bitterness of past grievances.

Sounds depressing, and it would be were it not for the exact elements that make this film so incredible.  The art of this movie will blow your mind; the house, the costumes, the decorations, the pinks & yellows, each scene crafted to be a photograph you could hang in your living room with pride.  The humor is sometimes subtle, sometimes silly, but it always feels realistic in a fantastical way, if such a thing can exist.  And the characters, how they are all individually painted, how each of them work through the problems of growing up and growing old in their own, unique, screwed up ways.  This blending of beautiful ingredients keeps the story from sinking into a somber place, and gives audiences hope that it will all end well.  Anderson has never been better, and while each of his films is wildly original and lovingly weird, Royal Tenenbaums takes the cake.  How could it not with this cast, this wonderful blend of actors who perhaps all have never been better or delivered more acutely a character to define a career by.  And we can’t forget the music; I hate to be grandiose, but this is the best soundtrack in cinema history.  I accept that this movie is different, that not every audience member will want to partake of something so rich, but I also can’t understand how someone could not see what I’m seeing when I sit down to watch this masterpiece again & again, how they could not feel what this lovely spectacle makes me feel.