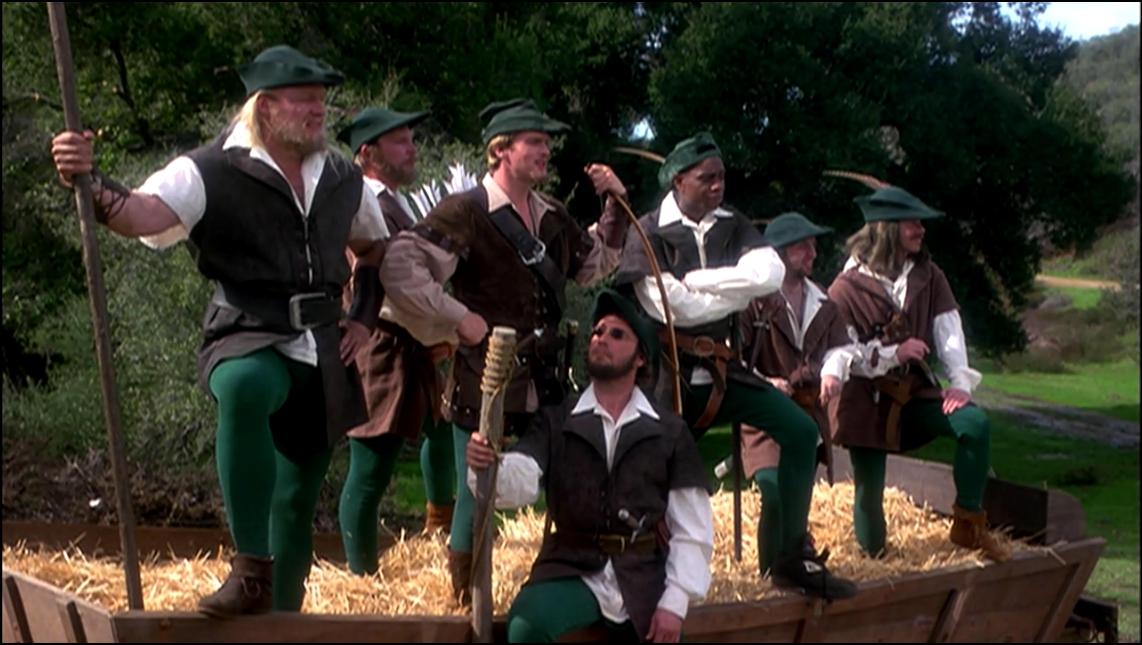 Men in Tights was one of Mel Brooks’ last movies and you can tell; the gag was up.  It’s shocking that it lasted so long, this running Jew joke that was Brooks’ style, this physical comedy romp genre that made fun of everyone and so was fun for everyone.  It lasted through the the 60s, 70s, & 80s, eight films before the 90s, with not every one a home run but most working as well as they were designed to.  The last decade of Mel’s career things started to slump, we just didn’t find the goofs as amusing anymore, and Robin Hood is a good example.  I liked it when I was 16 and watching with my friends who could quote every line like Holy Grail, but as an adult the same appeal is missing, or at least very, very different.

Robin of Locksley has returned to England after being a prisoner during the Crusades, and he finds his homeland changed.  King Richard is busy with war, so his brother John has taken the throne, and is ruling unwisely.  The people of Rottingham are being bullied for every penny they earn by the evil Sheriff and his men, which is breeding the seeds of rebellion.  Robin will become their leader, but first he must recruit his merry men: a black man named Ahchoo, a blind man named Blinkin, a big man named Little John, and a clever man named Will Scarlet O’Hara.  Together, along with the feisty villagers, they will rid the countryside of evil, and Robin may win the hand of the fair Maid Marian along the way, the greatest treasure in all the land.

It’s the standard Robin Hood plot for much of the way, with some standard Robin Hood fight scenes as well as homage to the older versions, but also still with Mel Brooks’ patented raunchy comedy and juvenile jokes.  They still make me laugh, I can admit that, these ridiculous dudes with their ridiculous jokes, it’s still entertaining if you grew up knowing every single line.  Blinkin, Ahchoo, the Italians from Jersey, the silly songs, the stupid gags; it’s classic Brooks, it’s not rocket science, but it’s also timeless in a very comforting way.  And the cast is cool: Elwes, Yasbeck, Lewis, Roger Rees, Dave Chappelle, Tracey Ullman, Isaac Hayes, Patrick Stewart, Dick Van Patten (Hey Abbot!), Dom DeLuise (my personal favorite part).  But, I mean, it’s all also kinda dumb.  People watching it for the first time would think the rest of us had gone crazy, it makes no sense, and it really isn’t all that comical if you watch too closely.  I think Brooks was losing a little steam, which is understandable, and he wasn’t a major player in the film himself except for a cameo, which hurt too, since Elwes is a terrible actor.  Overall, this is a classic that should remain so, but perhaps Lesser Brooks, and also not something that anyone new to his style should be experimenting with.