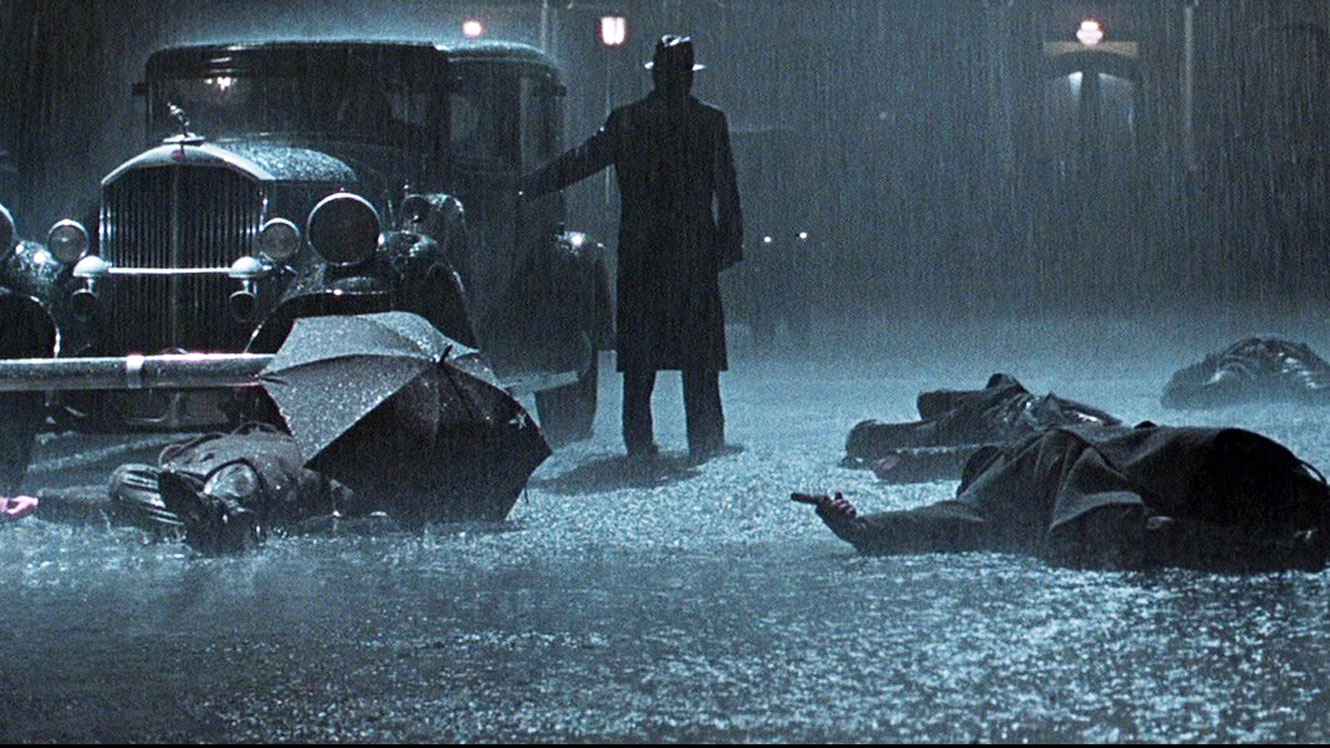 Sam Mendes’ first film was American Beauty and he followed that up with Road to Perdition; that’s one hell of a start.  He has a way with mood and with music, he can paint a picture flawlessly, and he knows how to form a cast; this is why his movies are successes.  Now, he’s not perfect, no one is, and watching these two films right in a row makes it easy to see his flaws.  One is casting youngsters in pivotal roles that they don’t yet have to talent to support.  Or, really, in the case of Thora Birch and Tyler Hoechlin, kids who will never be as special as we first thought that they might be.  Another is his penchant for ending movies with speeches, and that’s usually a bad idea.  Those two things were the only real problems with American Beauty, and he didn’t fix them in time for Road to Perdition, so we get a feature that’s incredible but that also couldn’t possibly be perfect.

In the winter of 1931 near Chicago, a boy from a family with connections to the mob is forced to grow up faster than any twelve-year-old should be made to do.  His name is Michael, and his father, Mike Sullivan, works for Mr. John Rooney, an Irish crime boss who practically rules an entire town.  Everyone is connected to Rooney, or to his son Connor, who isn’t as sharp as his old man but is twice as brutal.  When Michael accidentally witnesses Connor killing a mafia member who might rat out what the prince has been doing behind the king’s back, Michael and Mike are forced to run for their very lives.  The next six weeks on the road with his father attempting some sort of revenge for the destruction of their happiness will teach Michael about the mob business, his old man, and himself, as choices will be made that alter the future of Chicago crime and of a young kid who never wanted to live by way of the gun.

It’s too bad that Mendes makes the exact same mistakes here as he has before, because otherwise this film might have been one of the historic best.  But the kid simply isn’t great, can’t stand up next to the likes of the rest of the cast, and then is asked to give this laden monologue at the end of the film, which just feels forced and should have been left on the cutting-room floor.  It was Mendes’ second feature, it’s phenomenal for being a relative amateur’s project, but I still wish he had made changes faster, because this really is something special.  The music alone is reason to watch and weep, it’s so good, and then there’s the cast: Hanks, Newman, Ciaran Hinds, Daniel Craig, Stanley Tucci, Jude Law.  As a villain, Law is other-worldly, something you have to see to believe.  The action, the father-son, the time period, the cool darkness, the anger; the film was nominated for six Academy Awards, winning for Best Cinematography, and it deserved it all.  I watched this movie with my dad and it meant something, still does; it’s a powerful message wrapped in a consumable package, a true stand out that’s still tall today.