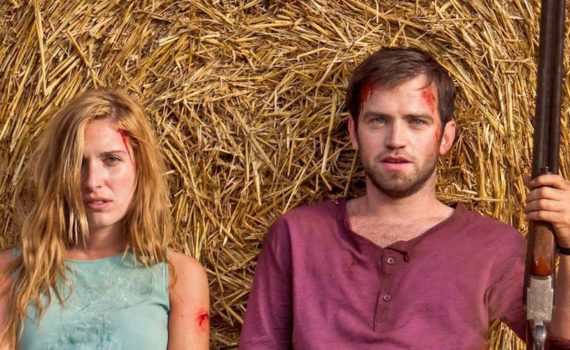 If you were looking for an absolutely original but absolutely remake-appearing French horror flick that seems straight out of the cheap, campy days of the late 1970s, Road Games was tailor-made for you.  But I assume that you, like me, find that description much too specific, so that the movie will miss you in at least one or two ways.  When sticking to a certain, dated style so closely, you’re guaranteed to pick up fans of the genre but alienate those you never loved what you’re referring to.  So, keeping an open yet critical mind, I tried to enjoy this film on the level it chose to present itself, and I think mostly I was successful.  But perhaps 70s slasher films belong where they were left, in the past, unless you have the magic to resurrect them, which Road Games didn’t quite possess.

Jack is hitchhiking through the beautiful countryside of France after a messy breakup has derailed his free-spirited existence.  Luckily, he meets the lovely Veronique along the road, a native who speaks both English & French and who seems to be just the woman he’s always dreamed of.  She tells Jack that the pair of them need to get off the road as soon as they can, that there have been murders in the area recently, grizzly killings that all point to the same homicidal maniac who enjoys butchering hitchers.  So the two new friends (and perhaps soon to be more) accept a ride from a lone man who offers them shelter & food for the night. But this odd man’s home is a mansion, his wife is an insane American, something creepy is going on, and blood is just waiting to be spilled.

You might recognize Andrew Simpson from 2006’s Notes on a Scandal, a great film, although honestly, Simpson kind of sucked here.  You might also recognize Josephine de La Baume from Kiss of the Damned, who was probably the highlight of this movie.  She was sexy & interesting, enough to grab my attention and keep me intrigued.  The rest though, like I said, is a complete homage to the genre, a silly, spooky romp where you don’t know the killer but where it hardly matters.  By the end, the film is about the deadly, weirdy fun along the way, the director hoping you enjoyed the ride.  I did, if marginally, and I agree with most other opinions that Road Games is just good enough to watch once, but definitely not a second time.