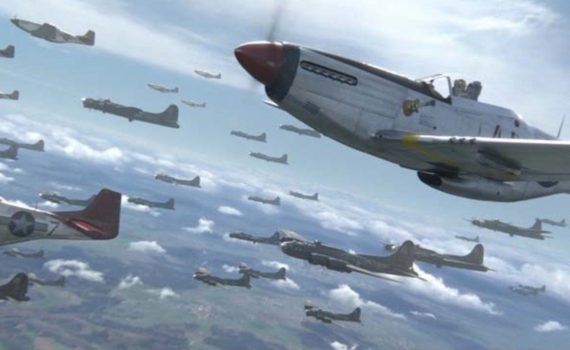 To be worse than Pearl Harbor you’d have to almost be trying to be bad, right?  And yet, Red Tails‘ only saving grace is its fervor to do the right thing, to tell the true story, to speak on the bravery of these fine men.  The story is beyond critique; the Tuskegee Airmen, the 332nd, the heroism they brought to the War, the ground they paved for future generations.  All that is above reproach, but the quality of this film, sadly, is not.  It really is like they were trying to make the worst war movie with the most terrible lines you’ve ever heard coming out of otherwise-capable actor’s mouths.  I can only assume mistakes were make, and if this was longer ago than 2012 maybe I could cut them some slack, but by now enough people should have figured out enough ways to make this movie right, instead of as wrong as wrong can get.

Italy, WWII, and the Allied advance uses its foothold in Italy to fly over Axis territory, bombing cities, destroying supply lines, and harrying the enemy.  The Tuskegee Airmen were a group of African-American pilots who were segregated into a squadron of their own, though they weren’t given many active missions, only clean-up jobs that didn’t earn them any honor in the air.  The prevailing white thought at the time was that blacks simply couldn’t do the job right, they were too stupid and undependable, and so the Tuskegee men were kept out of the real war.  Finally, given a fair chance, and painting their plane tails red to make them easily distinguishable, they accounted themselves among the best pilots in the Air Force, flying combat missions bravely and with outstanding skill, showing the entire country back home what being a hero really means.

One problem might be that Hemingway is a TV director, I don’t think he’s done any other feature, so it might simply be an issue of his not being right for the role.  Maybe he could have created a miniseries, or today it would be a Netflix limited series, something like that, because ‘feature film’ was apparently something he simply wasn’t ready for yet.  I’ve heard that The Tuskegee Airmen is a better film, I’ll have to check that out, and there’s really no way it could be any more awful than Red Tails, so there’s that.  This movie was poorly-acted, poorly-balanced, amateurish, messy, cheesy, and just plain crappy, like no one was trying very hard to do anything more than present the passion of the facts.  Those were cool; this lesson is fascinating, what an emotional piece of history to learn about, what a difference these men made.  And the cast is full of stars: Parker, Oyelowo, Terrence Howard, Cuba Gooding Jr, Leslie Odom Jr, Michael B. Jordan, Bryan Cranston, Gerald McRaney.  They just didn’t have enough to work with to make this story sing; the script was horrendous and the action was oddly skit-ish.  Red Tails is so very disappointing, I wanted it to be so much better than it was, and I’m not sure I’ll be moving on from my frustration any time soon.