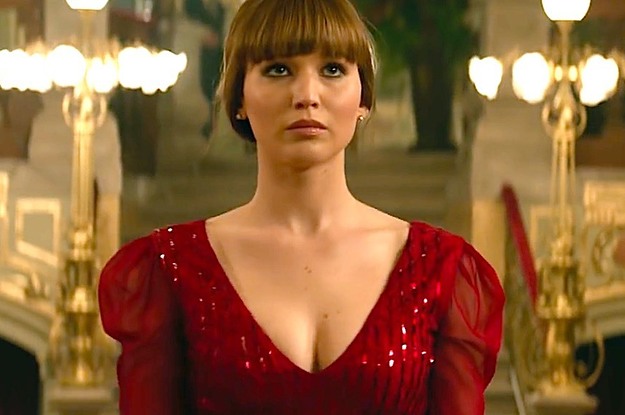 At the beginning of Red Sparrow, there is such a clear Black Swan atmosphere that it almost destroys the credibility of the entire film.  And I’m not only saying that because the movie starts with a ballet performance (it could even be Swan Lake for all I know, I have no idea), there’s much more of a resemblance than that.  The leg at a wrong angle, the stand-in dancer with JLaw’s face, even her eye makeup; I read that Aronofsky was the first choice to direct this feature, and it seems odd that it’s the Hunger Games guy instead, because it sure feels like Portman was replaced with Lawrence and the show went on.  Even the title, a color and a bird; is there a purposeful reference there, or are people running out of original ideas?  This is a pervasive question the entire way through, introduced at the beginning and carried until the end; what exactly is different about this time?  What new elements does this genre have to offer us?  How is this team going to make something memorable?  Unfortunately, I don’t think you’ll like the answers.

Dominika Egorova is a ballerina with a ton of promise, a young, beautiful, talented woman who is almost too perfect for the Russian government not to use badly for their own dirty means.  When she is injured, and with a sick mother at home, Dominika has no choice but to do what her connected uncle Vanya asks, which is to seduce an official, to make him desire her, to give him anything he wants.  When he winds up dead, Dominika is given a choice; be eliminated as well, or enter into Sparrow School, a covert academy for spies, a training center for the use of sex toward political gains.  She becomes one of the most alluring and dangerous Sparrows in the field, while still being a girl in over her head underneath the sultry dress.  Her new mission is to get close to an American operative named Nate Nash, but when her identity is compromised, she’ll have to decide which side she’s really on. I can see why JLaw is taking a break from show biz.  It’s not that she’s lost any of her fierce talent, I’m still a big fan of her acting, and I can completely understand/support that she wants to take some time to focus on activism, help kids, make a difference, give back, all that.  But her recent projects have to have helped in making this decision, this step back to regroup, and hopefully when she returns she’ll be better than ever.  Serena, Joy, Passengers; other than the X-Men movies, which are pretty good, the Hunger Games movies, which are pretty bad, and Mother!, which I happened to love, her film choices don’t seem to be trending in the right direction.  If Red Sparrow was an attempt to get back on the right foot, to get serious, to show some skin, to remind us how amazingly high her ceiling might be, it didn’t work out the way it was planned.

And it isn’t all bad, I’ll get to that in a second, but let me touch on the negatives first.  I can’t begin anywhere else but with the accents, which were atrocious.  JLaw at least was consistent, never wavered, just wasn’t ever impressive, while the rest ducked in and out of Russia or some imaginary place nearby like they were trying it out for the first time.  Specifically, Jeremy Irons and Charlotte Rampling, who I both admire, sounded like they both thought they were supposed to be half British.  Their characters were dumb as well, which didn’t help, but they should be on the lookout for their Razzies in the mail already, nominating them for Worst Red Villain Caricatures.  Also, the film was simply unnecessarily long, with too much filler and not enough action, rambling along without a clear voice.  And the sexy thrills, which could have been a strong point, were only uncomfortable; abusive and manipulative until all the entertainment was ripped away and audiences were just left feeling bad.  Even Lawrence, with her first nude scenes, couldn’t heat things up; the moments were far too unsettling.

There were some positives, I don’t mean to suggest that Red Sparrow was complete crap, but they took a while to notice, or perhaps I simply needed to remove my critic hat in order to begrudgingly allow them to entertain me the way they were supposed to when this movie was first thought up.  It’s based on a book, which might be the better way to go, and the film definitely had a spy novel feel, which did help a small amount.  Edgerton and Schoenaerts were actually solid, both are incredible actors, they held their own in their scenes, they just couldn’t be in all of them.  And I even liked the ending, the way the story was wrapped up, with a little twist to impress us and some drama to leave us wanting more.  If I attempt not to look too closely, the film was fine, Lawrence was able, I don’t regret sitting down to watch, I only wish more had been done to polish the gem that was somewhere deep underneath, because I think we all would enjoy loving this film, but it might not deserve it.