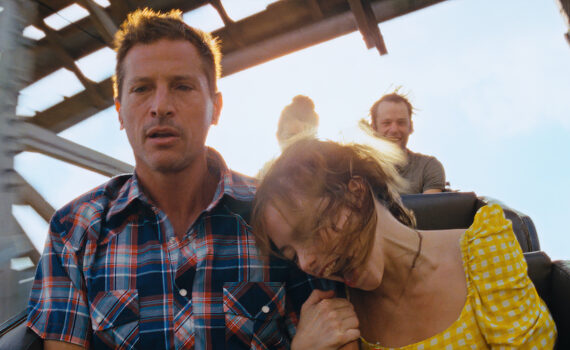 Red Rocket is a shockingly spectacular surprise, and it comes from so far out of left field, so far under the radar, that you question whether it was real at all, or just a very vivid, very horny dream.  The fact that Sean Baker can direct shouldn’t be a big reveal I guess, remembering his talent with Tangerine and his success with Florida Project, but even then, even with those films as lead-ins, nothing will prepare you for Red Rocket.  It’s a disaster you just can’t help watching wide-eyed, a far-too-intimate look into someone’s smutty life that both makes you feel both bitterly uncomfortable and also like an extremely awesome human in comparison.

I was shocked that this film was so excellent.  I liked Florida Project just fine, that kind of “geographical drama” is interesting, painting us a very specific picture of an area, its people, its poor, its dreams.  But that can also be a little too on-the-nose, like I don’t live in Florida in a motel, I don’t want to watch non-actors pretend to be prostitutes, I get the point but no thank you.  Red Rocket is different; yes it’s specific to its location and uses some real people to fill its scenes, but it’s also so well written that you’d swear you were just watching one man’s incredibly fucked up life flash by right in front of your comparatively lucky eyes.  Simon Rex, known for spoofs and not much of anything else, is so perfect as this sleazeball/salesman/liar/manipulator/dreamer that you’d believe it if he told you he was Daniel Day-Lewis in disguise; he’s that good and that convincing.  The story is hilarious, upsetting, frantic, and then boldly deep; it’s a journey through the soul of a seemingly soulless man, to see if there’s anything in there, and in the end we won’t really know for sure.  Not a film for everyone, definitely, especially given the subject matter and the high volume of sexuality, Red Rocket is nonetheless one of the best of the year, a beautiful, dangerous firework you didn’t know was being set off right next to your fucking face.