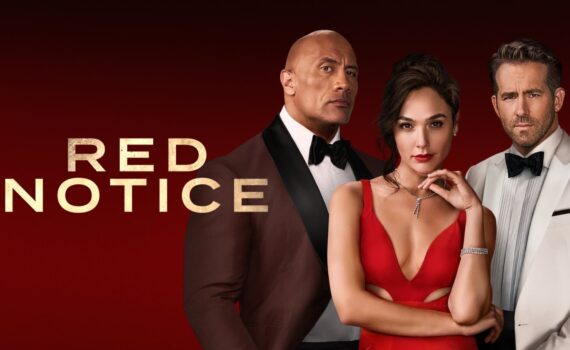 The only thing that saved Red Notice from complete destruction was that Gal Gadot was hardly in it; had she been featured more, the movie would have imploded much more quickly.  As it was, this Netflix “blockbuster” is about as awful an action flick as you’re ever likely to see, failing every time the pace is asked to pick up or the actors are asked to duke it out.  Gadot’s total ineptitude didn’t help, surely, but at least her role was kept to a minimum; but, then again, the film didn’t fair well without her either, so, yeah, a complete disaster.  Looked at as a monumental streaming event and an awesome spectacle of pure entertainment, Red Notice can barely muster “watchable”, and will no doubt go down as one of the worst blunders of this all-around-crappy cinematic year.

Nolan Booth is the world’s greatest art thief, amassing a staggering collection, being caught half a dozen times only to escape each one, setting himself up as a criminal mastermind and a genius escape artist.  John Hartley is the agent assigned to capture him yet again, to outsmart the smartest man in robbery, to bring this con man to justice.  And The Bishop is a crook in the shadows, jumping the gun on every stick up, stepping in front of every heist, outdoing Booth at his own game at every opportunity.  This unlikely trio will have to team up if they want to claim the prize awarded to the winner of the world’s greatest treasure hunt for Egypt’s most valuable treasure; Cleopatra’s three golden eggs.  Scattered and lost, they will need to be found soon to claim the reward, and our antiheroes will have to pull out every trick in their collective bag to collect the greatest payout in history, and to claim the title of the very best.

First, the good, which there simply isn’t much of.  I like the banter between Rock & Ryan, and I generally like both of those guys in most of what they appear in.  The Rock is likeable, we want him to be a hero, he’s just nice, and we want to watch him; talk about made for stardom.  Ryan is hilarious, at least I’ve always dug his humor, ever since 2 Guys, and I love his quick lines and clever comedy, in that Deadpool style.  Had the movie been the two of them wisecracking and becoming friends and that’s it, well then, that would have been fun.  Unfortunately, that was only a part; it happened, and when it happened I enjoyed it, but it didn’t happen enough.  The rest of the film was the worst action you have ever seen, like if you watched Fury Road or Mission Impossible right after you might have an aneurysm thinking about what you just saw go so wrong.  The action was laughable and insane, clunky and unbelievable, about the worst cinema has to offer, and that’s just not something I can forgive.  The other major problem was Gal Gadot, who we are understanding can’t act.  She just can’t, that’s it; we liked her in the first Wonder Woman but apparently that was her peak.  She’s so bad, the flow of the film is worse, the fights are embarrassing, and Netflix gets another very, very wrong.