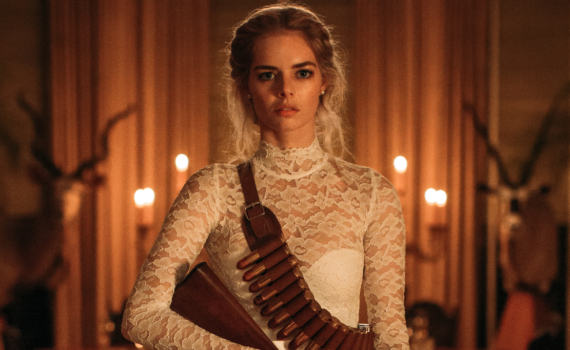 Ready or Not owes a lot to both Cabin in the Woods and Happy Death Day, filling those shoes so nicely that you may even start to believe that we’ve just seen the creation of a brand new genre.  That’s fun to pretend, even if it’s not true, but this film is wacky and original enough to warrant such fantasies, and Samara Weaving’s emergence as a literal Scream Queen only adds to the magic that is this movie.  It’s horror, it’s comedy, it’s wrong, it’s wonderful; Ready or Not may very well be the shock of the season that you need to let shake you.  Even Stephen King is singing the film’s praises, and when that dude recommends we all need to listen.  He knows scares, but he also knows balance, and that’s what we experience from this feature, a special blend of laughs and lacerations that compliments the plot perfectly and leads audiences to one of the best times we’ll have in a theatre this year.

Grace is the lucky bride at a fabulously lavish wedding; the only problem is her new family.  Alex is great; sweet, kind, funny, cute, the perfect husband, although he was a little hesitant to get married.  But marriage is important to Grace; she never had a family of her own, and wants to be a part of something bigger than herself just as much as she wants to spend her life with the man she loves.  And everyone adopts a few weird in-laws, right?  Well, not quite as weird as the Le Domases, which Grace will soon find out.  On their wedding night, Alex takes her down to meet all the members of the close-knit family and to play a game; a tradition unlike any other.  Grace has to pull a card and the family has to play, which sounds simple, unless you pull Hide And Seek, which is anything but the basic romp we played as kids.  This time it’s to the death, and the reason why is about as crazy as this night is about to become.

Samara Weaving is a revelation, and there were only a few times I could tell that she was hiding an Aussie accent; the rest was a clinic is comedic timing and lines that could become instant Americana from a film that is destined to be a cult classic.  Grace is lovely, normal, relatable, cool, someone you want to be around, and a young woman you immediately root for, since she’s the only sane person in a house full of loons, and you just hope to God that she can get away in one piece.  The film has that sort of transportative power, it sucks you right in, and you flee alongside Grace the entire time, Weaving playing her so beautiful that the two women merge and become one hero.  This movie is going to launch her career skyward, so get ready to hear her name a lot in the coming years, and what’s more is she deserves it.

Ready or Not is a spectacularly entertaining mix of violence and humor, making shooting people in the mouth with arrows somehow hilarious.  Car chases, crossbows, creepy kids, even the Devil himself; it all somehow reads funny, while also totally terrifying, which is the main reason this cool comedy deserves a standing ovation.  And what I was most impressed about throughout was the ability of the filmmakers to keep the action ramping up, to never let off the gas, to keep audiences on their toes, until the shocking finale that will have you covering your eyes and laughing your ass off at the same time.  It’s not easy teetering on the edge of so many genres, styles, and moods, but this movie made it look effortless, and that’s what we’ll remember all year; that a film came out of the blue and blew us away, and that we loved every minute of it.