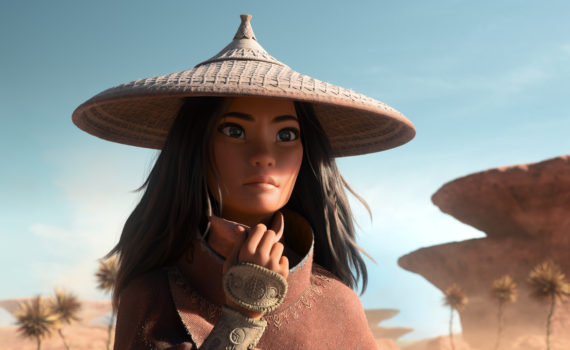 Raya and the Last Dragon is more Disney Fairy/Tinkerbell/Pixie Hollow than it is Tangled, Frozen, Mulan, Moana, although, my god does it try hard to copy from a dozen Disney flicks you’ve seen before, all at once, all the time, and all for naught.  It’s a recycle more than a rejuvenation, like an old throwback that reused the same animation from another film, but at least those had good stories, good characters, and good music; all that Raya can offer is beautiful set pieces and some fun action.  That might be enough for your average audience, but those who have seen better should know better, and will probably walk away disappointed once again in a company that doesn’t seem to care for content any longer.

There is a land where dragons once thrived and where people once lived in harmony, although all that ended a long time ago.  The dragons had to sacrifice themselves to save the humans, banishing life-altering evil by creating a magic orb that would protect the land.  But people are mistrusting, and soon there are five tribes who all consider themselves enemies, with only one possessing the beautiful sphere.  Years later, and with evil threatening to reemerge, Raya, the last protector of the gem, goes to each kingdom on a quest to unite the power that once protected all, and to awaken dragons once more.

There’s some Tangled, some Frozen, some Mulan, some Moana, even some Boss Baby out of nowhere, which is a different company all together, but it seemed like anything was fair game to writers who didn’t know what to do beyond a clever start and a lovely world.  That was all that was to the good, the base and the visuals; the rest was uninspired and uninteresting.  The morals were murky, the plot was bumpy, the animation looked second-rate, and the voice-overs were incredibly lackluster, leading to a film that felt like it should have gone straight to video.  It was missing music and heart, almost like it was banking on being impressive rather than strong, and it felt like the entire team had rushed to get an idea out instead of making sure that idea worked well first.  Raya is simply second-tier, and it’s missing that wonderful Disney magic that, sadly, is getting harder and harder to find.