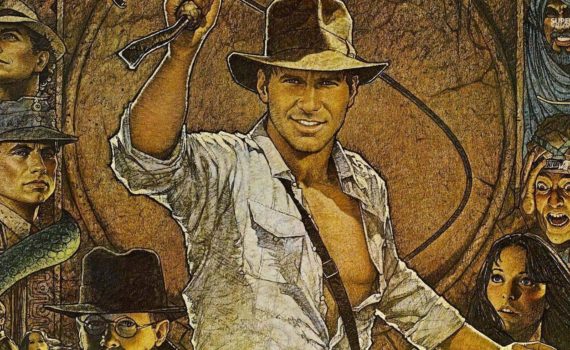 I think it’s important that we don’t let the passing of the way-more-than-we-like-to-admit years change our opinion of what’s obviously a classic film; Raiders of the Lost Ark is still magic.  It would be too easy, watching it now, to poke holes in its story and laugh at its attempts at special effects, but that’s only because of the Blu-ray revolution, only because of what has been thrown in front of our eyes in the time since, not because Spielberg’s masterpiece is anything other than that.  I just want to make sure my position is clear; Indiana Jones is a goddam hero, I grew up loving him, and I’m not planning for that to ever change.  There are moments when the first flick acts a little silly, but I doubt I really care; it was ’81, it’s an epic adventure, Indy is larger than life, and that’s the way it’s supposed to be.  There’s no reason for us to mess that all up now by pretending we’ve somehow risen above a time when punching Nazis was literally the coolest thing you could do and you wished that Dr. Jones was your secret second dad.

In the late 1930s, if America wanted to get its mitts on a coveted ancient relic, whether for power, money, or to keep it out of the hands of evil foreign entities, they sent Indiana Jones, knowing that the infamous archeologist would stop at nothing to preserve history and bring home the prize.  Dr. Jones was a professor during business hours, but a treasure hunter off campus, traversing the world in search of rare antiquities, beating up bad guys who just wanted to make a cheap buck.  His latest exploit; find a mysterious medallion, locate a lost city, discover the Ark of the Covenant, and grab it before the Germans can.  Easier said then done, since he doesn’t know where the medallion is, the city is buried under the Egyptian sands, and the Nazis have half their entire army looking for both.  But odds never bothered Indy before, and, with the help of his #1 gal Marion, he’ll save the day for sure.

I don’t mean to come off as defensive from the very beginning, and maybe this is a case of making up a group that doesn’t even exist, but I just have this feeling that there are people who would watch this movie and not understand its greatness, if only because they missed the time period in which it was truly great and can’t peer through the Marvel mist to see it now.  Raiders of the Lost Ark is special, a hallmark, a pillar of the industry, and, Jesus Christ, look at the people who made it: Steven Spielberg, George Lucas, Philip Kaufman, Frank Marshall, John Williams.  The crew stands out much more than the cast, which isn’t much beside Harrison Ford and that one girl from Animal House.  Alfred Molina has a tiny part, which is cool, but beyond that there isn’t much to notice, which is fine; Indy is indeed The Man.  His daring do is all we need, his subtle humor gets us through, and we know he’ll find a way out of any sticky situation, because that’s what heroes do, and that’s how movies like this ought to be made.  The Nazis, the Ark, the desert, the submarine, the fistfights, the gunfights, the booby traps, the snakes; how could you go wrong with a film that’s this intentionally fun and fun-loving?  You can’t, that’s the answer, you just can’t, so don’t be a stick in the mud; just let the saga of Indiana Jones do its job (thrill), you sit back and do your job (absorb), and let your troubles slide away, at least until Part Two.