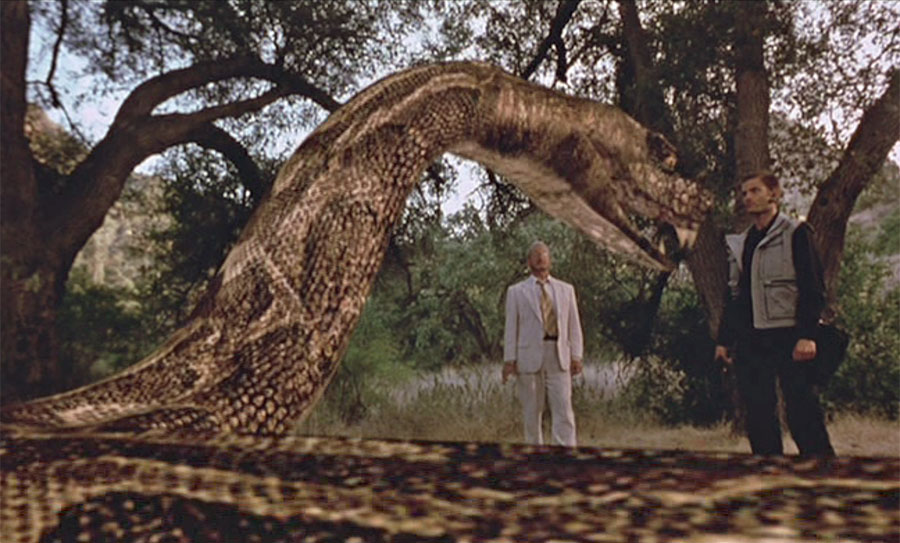 Have you ever thought to yourself, “What if they made Anaconda again, but worse”?  Well, you’re in luck; here’s Python.  There are a million and one dumb creature features that you could claim are the worst in their field, and any number of them involve snakes, bugs, bats, piranhas, spiders, roaches, you name it, but none are quite to specifically stupid as Python, a movie you really do have to see to believe.  At least it’s partly intentional, party a play of the style, a throwback even, and that’s all fine.  But there’s no denying that this film is also just plain insulting to the senses, regardless of intentions to be silly; silly is one thing, stupid is another.  Just listening to Johnny Rico try to do a Southern accent is enough to cause brain melt-age, and if that’s something I can help you avoid, I find it my duty to steer safely away from this movie.

The military just accidentally dropped a giant snake on an unsuspecting town; what loony mishaps will happen next, Uncle Sam?  Well, it’s even worst than it sounds, because this snake isn’t just big, it’s also smart and full of acid, and apparently wants to eat anything it can find, especially people who go off alone literally anywhere and women who are unlucky enough to be planning on having sex, who have just stopped having sex, or who just want a take a shower instead of having sex.  Maybe it’s the snake’s fault, maybe it’s not dealing well with its own coming-of-age, who knows, but the good people of this tiny hamlet better watch out, because a python is loose in their homes, and boy is it hungry.

Python is fun at first, but then it keeps going and you realize, “Oh wait, I actually have to watch an hour and a half more of this shit”.  It feels older than it is, it seems to take longer than it really does, and, other than a few funny moments that feel like throwbacks to the classic b-movie genre, the entire thing is complete garbage.  I mean, there’s blood&boobs, that’s something, it’s a creature feature, we know what to expect and they know what to deliver.  But my god is it delivered badly, spared, well, all expense.  The only real reason to watch, aside from its base entertainment value to anyone who happens to be high while viewing, is the cast, cause it’s a doozy, a who’s who of d-list celebrities from things you vaguely remember seeing before.  William Zabka from Karate Kid, Dana Barron from National Lampoon’s Vacation, Casper Van Dien from Starship Troopers, Keith Coogan from Adventures in Babysitting, Marc McClure from Superman, Robert Englund who was Freddy Kruger, Will Wheaton, Jenny McCarthy, Ed Lauter.  It’s insane, I’m telling you; stay away if you value your life.