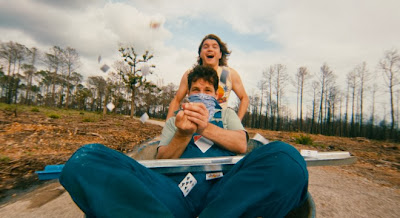 Taking a look at director David Gordon Green’s previous films makes you a little nervous about how Prince Avalanche will turn out.  Pineapple Express, Your Highness, and The Sitter weren’t exactly the greatest pieces of modern cinema.  And even though I like the Rogen/Franco/Hill crew, I had my doubts coming in about how he would transfer that raunchy comedy talent to a more quirky comedy style.  He had the right actors for the job, as both Rudd & Hirsch are very talented, naturally funny, and can turn on the serious when it’s called for.  But now add in the fact that this film is based on the 2011 Icelandic comedy Either Way.  That’s a lot of strange & unique pieces that have to fit together snugly in order for this movie to be high-quality, or at least enjoyable.  And as it turns out, perhaps there were just too many odd components and not enough room for error, because if the film worked it was just barely.
Alvin & Lance are a pair of road workers in 1980s Texas.  They live in a tent in the woods, bathe in the local streams, catch fish for dinner, and by day paint lines on new pavement that has been laid after a horrible forest fire.  Their job is fairy monotonous, although Alvin tries to make it more exciting by playing German language lesson tapes, and Lance shares his wild stories of nights at the clubs in the city & of the various girls he has met.  Alvin has a girl back home, who happens to be Lance’s sister, and he writes letters to her professing his love despite voluntarily taking this break from her & from civilization.  This strange duo of lonely men work hard during the day, discuss the world at night, and try to figure out life from their own odd perspectives, all while living off the land, communing with nature, and getting drunk off spiked Ale 8.
You better enjoy offbeat indie comedies if you want to have even the slightest chance of liking this strange film.  Everything about it is just plain weird, from the one-on-one conversation to the Walden-esque forays through the woods.  There’s really not an exact point to the movie and you’re not going to come away with much, but it definitely delivers a unique story from a fresh perspective, if that’s what you’re looking for.  Paul Rudd & Emile Hirsch are both actually very strong, especially playing off each other, and they can make you laugh & make you feel very depressed at the exact same time.  So there are parts that worked well and some solid moments, but overall the film was a little too crazy to be great.  It was a bit messy, maybe a little flippant, and never really got on track.  The moments between the men were hilarious and I wish the movie had centered itself on them instead of losing itself in some confusing self-indulgence, but in the end it was a quirky comedy that was good not great, one that would be hard for most people to enjoy and I doubt will leave a lasting impression.

Lindsay and I watched this this past weekend. We fell asleep, which might not be the movies fault, but I will say if a movie’s job were keep you awake – it failed. I really like both of these guys, and I really liked their interaction with each other, but there wasn’t enough there plot wise to keep my eyes open.