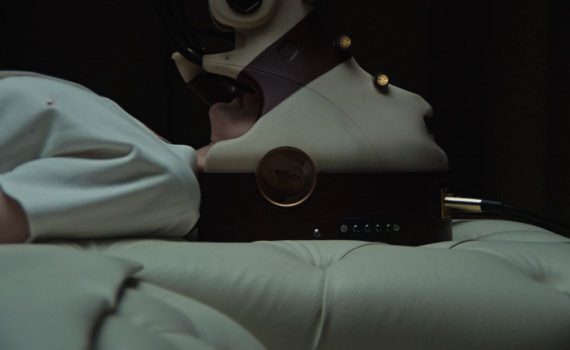 If you were to ask me to make a list of everything I enjoy about sci-fi movies, Possessor would check almost every box off the list.  Some cool distortion of reality, a new technology, bizarre mind games, a little sex, a little violence, a little confusion & delay, Thomas.  It just seems like this film would be completely up my alley, and yet the result is almost the complete opposite, like some director made me a movie of things I like but completely forgot about taste level.  Possessor is backward to my taste, the antithesis to my aesthetic, and that’s so shockingly disappointing, because this film should have been awesome, but it somehow accidentally arrived inside out.

Tasya has an unusual job.  She’s not really an assassin, but that’s the closest thing to what she does; she’s more like a very talented actress who ends each performance by killing her audience.  Using a secret technology, the company she works for takes contracts out on the lives of very important people and then implants Tasya into the mind of a key player, where she then gets that person to murder the target.  Afterward, she kills “herself” and returns to her natural body; no suspects, no motives, just a crime of passion that can’t be explained, a dead millionaire, and a very happy player somewhere who got a death they wished for.  But on her latest mission, Tasya’s mind starts to meld with the host body, the pair of them competing for control of his actions, until it’s hard to tell where she beings and he ends.

Of course, you could simple say that the movie didn’t resonate with me, that it simply missed me, which is my problem, not the filmmaker’s.  But I’m not alone here, there’s a taste thing going on, like the film was made with a horrible ingredient that most people just can’t like.  It goes too far, honestly, it goes way too far, and it doesn’t hold itself back in conventional ways when a little convention could have saved the entire, messy thing.  Because the pieces were there: intrigue, death, science, the absence of reality, the terror of losing control.  The story was really cool, and the actors were really great, that wasn’t the problem at all.  The issue was the artistic outlook, the visual portrayals, the mood and the music and the gore and the gross.  It just landed like a lump in the stomach that threatened to make us sick, like a cheap roller coaster that looked nice on the outside but then shook us until we left heaving.  Possessor is not something I’d recommend to anyone but those few who enjoy horror/sci-fi done in this peculiar, particular, poor-taste way, which I guess can be fun on occasion, but just wasn’t for me this time around.