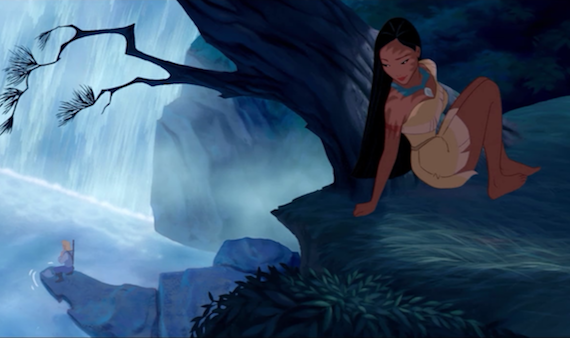 The Disney Renaissance is considered to have taken place between 1989 and 1994, with The Little Mermaid, The Rescuers Down Under, Beauty and the Beast, Aladdin, and Lion King.  But there was a second wave of the rebirth in the late 90s, which you can look at as Renaissance Vol. 2 if you’re a positive person, or a turn toward what would ultimately become known as The Slump (in the early 2000s when Disney inexplicable went with computers instead of illustrations) if you’re being a little more negative.  Either way, 1995 to 1999 was a strong era, perhaps one of the most overlooked, with Pocahontas, The Hunchback of Notre Dame, Hercules, Mulan, and Tarzan.  Among them, Pocahontas sits like a presiding queen, a musical unlike many of its contemporaries, and a film to love more & more each time you rediscover its brilliance.

As the Virginia Company sets out for the New World to start the settlement of Jamestown, their heads are filled with visions of endless forests, bloodthirsty savages, and hidden gold, none of their number more excited by the prospect of wealth then their leader, Governor Ratcliffe, who sees fortune beyond measure in his future.  Heading the expeditionary force is veteran native-pacifier John Smith, who’s seen a hundred new lands and has conquered them all.  But awaiting them on the new shore where they will make their new home is a people who have lived there for generations, and who value the land for what it has to offer, not for what you can take from it.  Pocahontas, daughter to the chief of a native tribe, has always been one with the natural world, and now that spirit guides her to befriend John Smith, to understand the value of harmony and understanding, to raise her voice when war threatens to destroy every dream and every peaceful possibility.

That second half of the Renaissance is no joke, there are some stellar movies there, and Pocahontas is one of them.  The animation is beautiful, like none other, even among Disney, with such a marvelous blend of nature left alone, nature turned into art, and intentional color splashed over every scene.  Then there’s the music, which is phenomenal: Steady as a Beating Drum, Just Around the River Bend, Listen With Your Heart, Colors of the Wind, Savages.  The soundtrack was done by Alan Menken, the legend, but this time he was joined by Stephen Schwartz, which is why the movie has such a stage feel, because Schwartz is a theatrical genius: Godspell, Pippin, Working, Children of Eden, Wicked.  The visuals and the vocals combine to create an amazing display of talent, and that is supported by the cast, which is rather excellent: Bedard, Gibson, the voice of Cogsworth, Christian Bale, Billy Connolly, Linda Hunt, Chingachgook himself.  It’s simply impressive what elements were melded together to create this explosion of sound, color, character, and ultimately message, as the meaning sticks with you just as long as the tunes do.  If you don’t remember Pocahontas from your childhood as vividly as some of the other Disney classics, give it a re-watch, because it has so much to offer, especially to theatre-lovers, and so many wonderful things to say.