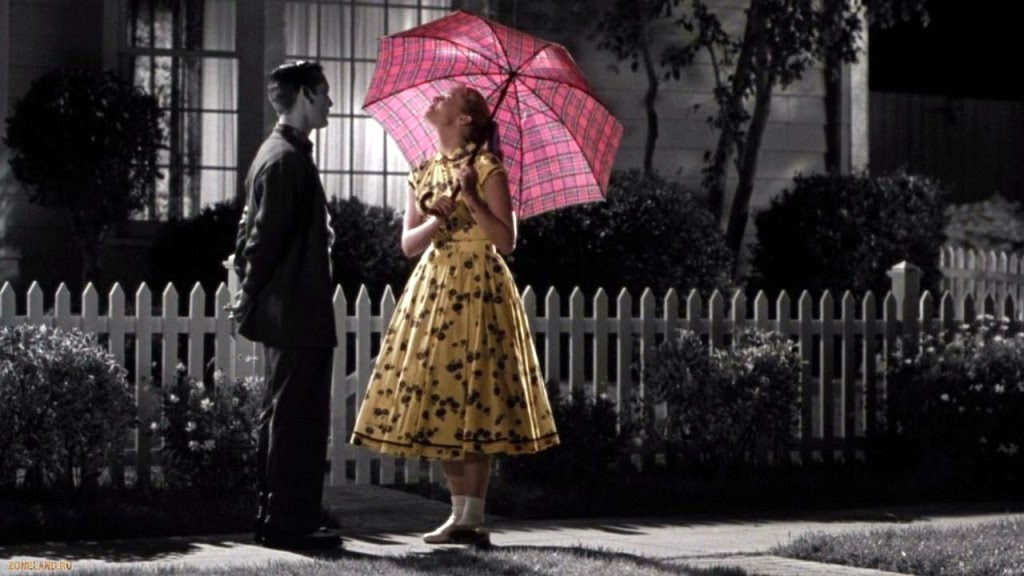 Before Gary Ross wrote The Hunger Games and Free State of Jones, he churned out a bunch of hits in the late 80s, 90s, and early 2000s.  Big, Dave, Pleasantville, Seabiscuit; all films with Ross as either the writer, director, or both.  Not a shabby list, even considering his penchant for Tobey Maguire, whose boyish naiveté was working in his favor at the time.  I remember seeing Pleasantville with my parents shortly after it came out; I would have been a teenager who was just dabbling in the arts, they would have been precisely the people who hoped our country could return to the “good old days”.  So it’s perhaps no surprise that I remember the room being a bit awkward and us as a group not loving the film; good thing I gave it a second chance, because now I most definitely do.

David is a classic nerd, Jennifer is just beginning to get cool.  These teenage siblings could not possibly be more different, but they’re about to spend much more time together, and in a much stranger place, than either of them could have imagined.  David is a giant Pleasantville fan, an old Mayberry-esque black & white TV show that he knows by heart.  But when he & his sister fight over and break the remote control one night, they are both transported into the television, into Pleasantville, into the roles of Bud & Mary-Sue Parker, two perfect children in a perfect town.  Their mere presence there begins to disrupt the harmony of Pleasantville, adding in things like discord, sex, and even color.  As the kids try to get back home, the townsfolk try to cope with all the changes, from rain to art, from enjoyable experiences to painful realizations.

This film doesn’t try to hide its morals, and for that I tip my cap.  The themes of race, gender, sameness, and many others are presented here first in metaphorical & literal black & white, but soon in bright color, never pretending to be saying anything but the blunt truth.  It’s a beautiful film, both cinematically & thematically, raising fascinating topics and showing off wonderfully stylized scenes.  It’s often like a painting come to life, and art has a definite impact on the plot, parading brilliant images past for our enjoyment.  And since this is a throwback of a movie, at least now, it’s fun to take a look at the actors who were involved: Maguire, Witherspoon, Allen, William H. Macy, Jeff Daniels, J.T. Walsh, Don Knotts, Jane Kaczmarek, Paul Walker.  It’s become a time capsule film in many ways, and I’m thankful for that; not only because it’s like safeguarding a wonderful portrait but also because these lessons should never be forgotten.