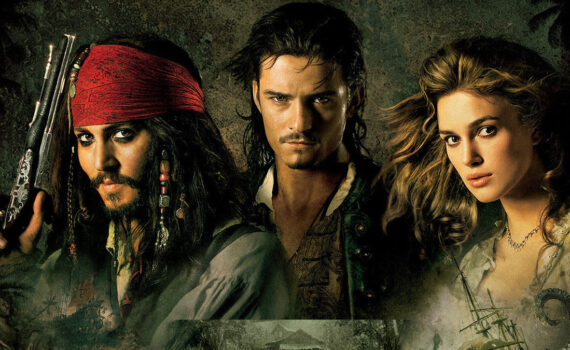 Jack Sparrow is back and …a little worse for wear, but that doesn’t stop Dead Man’s Chest from being an entertaining adventure for the whole family; a step down yes, but a complete disaster no.  Verbinski knew what he had been lucky enough to be handed well enough, he wasn’t going to completely fail to bring it to life a second time, and this cast was only improved by the additions, not hurt by the landing of a sequel.  Nothing can rival Curse of the Black Pearl, that’s obvious, and at first this film seems pale in comparison.  But if you watch it with wide eyes, looking for fun, you are bound to find it.

Jack is off being the Captain of the Black Pearl, Will & Elizabeth are going to get married, Captain Barbossa is dead; all is right with the world.  That is, until the powers that be decide that Will & Elizabeth should be punished for helping Jack escape; now they will have to find him and take a treasured object of his if they want to clear their own names.  But it’s not that simple; Jack is making deals with Davy Jones himself, who controls the Kraken, and that’s a lot of supernatural power packed in one squishy punch.  Backs will be stabbed, promises will be broken, swashes will be buckled; it’s a wild ride on the high seas, better grab a line.

The first in the franchise is by far the best, there’s no debating that, it’s one of the best action/adventure movies of all time, let alone of the last few years & set at sea.  But although Dead Man’s Chest doesn’t exactly live up to its predecessor, it also doesn’t embarrass itself either.  This is simply a silly movie that’s enjoyable to watch, and although it tries to stuff far too much into its story arc, you can forgive it for going too far, because that’s better than not going far enough.  Never boring, often overwhelming, this film jam packs the daring do and asks you to hold on for deal life, throwing extra characters and extra fright scenes at viewers with reckless abandon.  Not for everyone, not to be over-analyzed, just to be experienced, Dead Man’s Chest is a nice #2.