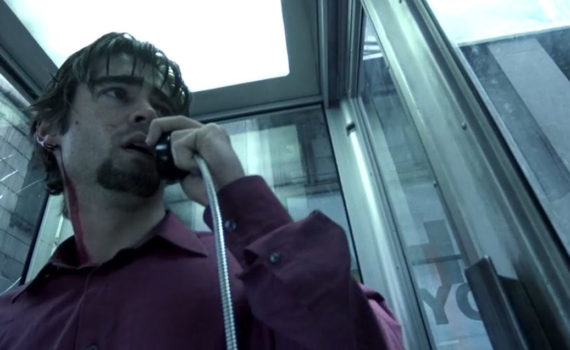 Phone Booth is fun to watch almost two decades later, because it really plays up the phenomenon of flip phones and speed dial, which seems so archaic to us now.  This film aged faster than it could possibly have known it would, because technology has sped along at an exponential pace that could not have been fathomed.  Still, thrills are thrills, and Joel Schumacher knows what he’s doing in that department: Lost Boys, Flatliners, Falling Down, The Client, Batman Forever, A Time to Kill, Batman & Robin, 8MM.  He knows how to entertain us, even when his content isn’t really that good, and that’s got to be a certain art form, knowing how to make audiences happy even with a subpar product.  Phone Booth is good, not great, but it’s enjoyable in a twisted way, which is exactly what it’s aiming for, so job well done.

Stu Shepard is a scumbag, and his wife might be the only person in New York City who doesn’t know it.  He’s a publicist, he lies for a living, and you can’t believe a single emotion that comes off this slime ball, because every human is a game he thinks he can play.  But he might have gone too far this time, because it seems that he made a very peculiar enemy, and that enemy is out to ruin his life.  In a phone booth talking to his would-be mistress, Stu is called by a mysterious man who knows everything about him, from his suits to his watches, from his wife at home to his actress on the side.  The man wants Stu to own up to his sins, to stay in that phone booth until he’s ready to confess, with a gun pointed down at him from a nearby window ready to punish him if he does not obey.  A game of cat and mouse to the death and a bizarre confessional that will end in murder, this phone booth becomes the only thing that matters to one man, the devils on his shoulders, and an eye in the sky looking down on Stu through a rifle scope.

Even though it felt like a two-part episode of a popular cop show, Phone Booth still worked, and that’s partly because Schumacher knows what he’s doing, partly because audiences have a natural morbid curiosity, and mostly because Colin Farrell is a tremendous actor, even when he’s being too pretty for his own good.  He really is sensational, he’s proved that many times since this film debuted, and he showcases that skill here, mostly on his own and mostly in a goddam phone booth.  That’s the weirdly smart part about this movie, it’s short, in one place, says one thing, but somehow crowds that simplicity with enough noise, movement, and quick thinking that the story works when, really, is probably shouldn’t.  This is a silly idea, but it makes sense somehow, both to casual audiences and for more critical minds; Phone Booth will in no way blow you away, but its solidity speaks for itself.