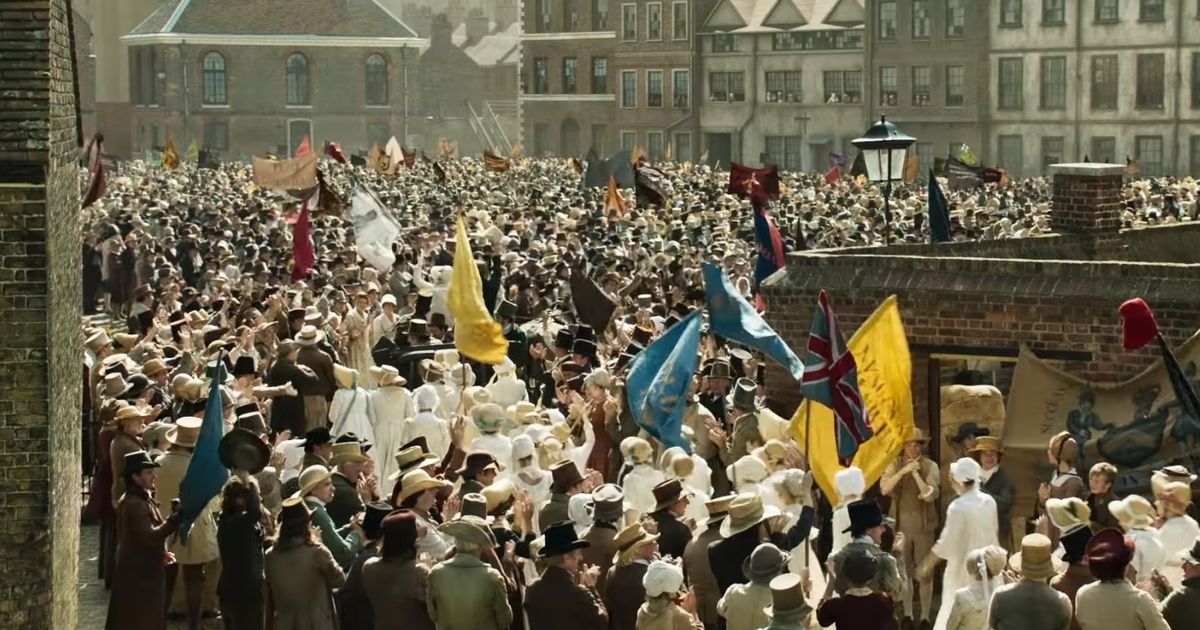 I would have thought it would take Terrence Malick to make a movie this interesting and yet this boring, but here Mike Leigh is doing his best impression, and so, good job?  Peterloo is equally as well-made as it is tedious to watch, a nice look at history from within and a terrible slog through the annals with no reward at the end.  Leigh takes a disastrous, offensive event and brings it to our attention, which is to his credit, but while doing so forgets how to make a movie that audiences will stay awake long enough to see.  There is a balance somewhere between the two, we’ve seen it done before, it can’t possibly be that hard, but Leigh wasn’t able to work that sort of magic, and the result is a tumult of thees & thous that last for 150 minutes but feels like 150 years.

After the Napoleonic Wars ended, Britain descended into a commoner’s nightmare; a country of greed at the top and famine at the bottom.  Workers were paid little money, allowed less freedoms, didn’t have a voice in their government, and were quite literally starving, while their pompous Prince grew fat.  It was a time of societal upheaval across Europe, and England was about to face changes of its own.  The people of Northern England, around Manchester, began clamoring for change and representation, which was seen as sedition by the wealthy ruling class in London.  Workers began organizing a party to relay demands to the King and changes to Parliament; lofty goals perhaps, but their numbers were strong and their cries were loud.  At St. Peter’s Field they gathered to hear a renowned speaker and to raise their own voices, only to be attacked by local militias and the Crown’s armed troops, in what would become known as the Peterloo Massacre, scarring British history forever.

I rather liked Mr. Turner, Leigh’s only real hit, and it was slow as well, but not in the obviously over-worked way that Peterloo was drawn out.  The former spanned years, we saw a long biopic coming; the latter is a story that could have been told in half an hour rather than in two & a half and would have been just as impacting.  For the story here is incredible, people fighting two hundred years ago for freedom of voice and of union, we should know how these people died unjustly, striving for the rights you & I take for granted.  That’s powerful stuff, and the massacre at the end is hard to watch, the characters we meet along the way mixed into the fight in such a way that we become so worried for their safety, having watched their arcs to that point.  But we meet too many, see too much, wait too long, and by the time it’s been a couple hours we’re exhausted from listening to a hundred different actors give their speeches when all we really want is some meat on the bone.  Leigh is unable to direct a film in Peterloo that works in real life, that watches smoothly when real audiences are sitting down in front of it, despite high quality acting, costumes, sets, and presentation.  The art is there, and we get the drift, but by the end we’re lucky not to have drifted off to sleep.