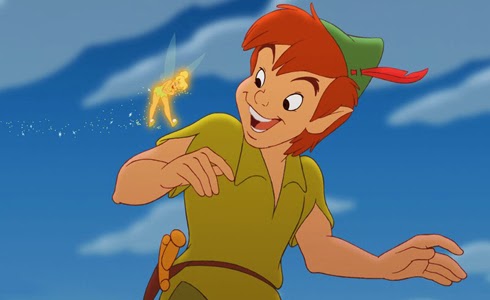 You can’t get much more classic than Peter Pan.  When it comes to Disney movies, not many can claim to be more iconic, more pivotal, and more defining.  The films of the 30s & 40s will always be a part of history: Snow White, Pinocchio, Dumbo, Bambi, Cinderella.  But Peter Pan would go on to become the face of Disney, the example of never growing up.  And Tinker Bell spawned a franchise all on her own, as my daughter could attest to.  Pixie Hollow is a huge hit, and Tink flies at the beginning of every single Disney film.  So when judging animated movies, I know of none better to put at the top of the list than this film, a movie that all other fairy tales aspire to me, a story that will live on forever in the hearts of those who refuse to age completely.

Based on the book & play by J.M. Barrie, this is as well known a story as can be found in America, a borrowed masterpiece that has swiftly become part of our culture.  The plot of the film varies a little from the plot of the novel, but the basic premise is the same.  The Darling children (Wendy, John, & Michael) love to play Peter Pan.  Wendy tells his tales, the boys become the characters, and the entire imaginary world of Neverland lays open to every dream.  But the children are about to discover that Peter is no fictional hero.  He’s real, he visits their home, and he has recently lost his shadow.  Entering the nursery to retrieve it, the boy who never grows up meets the trio of English youngsters, inviting them to come with him to Neverland.  There, adventures abound, as the Indians are always on the warpath, the mermaids laze the day away in their lagoon, animals prowl the jungles, and the pirates constantly plot to defeat Peter and his Lost Boys once and for all.  The Darlings enter into this world with the innocence of a babe, but with vicious Captain Hook on the loose they had better be on the lookout.  Excitement waits around every corner and Peter Pan is king of it all.

What a wonderful story, one that’s as whimsical as it is marvelous.  The plot, the setting, the island, the narrow escapes, the buccaneers, the Lost Boys, the jealous fairy, the hideouts; all the pieces come together to entertain all ages any number of times over.  Here is a film that doesn’t get old and never changes, capturing the spirit of Neverland in a way that even the filmmakers couldn’t have imagined.  It pays homage to the amazing original story and yet somehow becomes a project all its own, a stand-alone film that can be loved just as much as the original text.  Perhaps it’s the music that allows this to happen, as the soundtrack is as strong as there is in any Disney movie.  The Second Star to the Right, You Can Fly, A Pirate’s Life, What Made the Red Man Red, Your Mother and Mine; incredible songs that come one after the other in a procession of unforgettable music.  I don’t think it’d be possible to watch Peter Pan without having a positive response, without feeling good and happy that you sat down for a bit.  It’s a film that is beloved by children, that can be appreciated by adults, and that never gets old; a classic through & through.