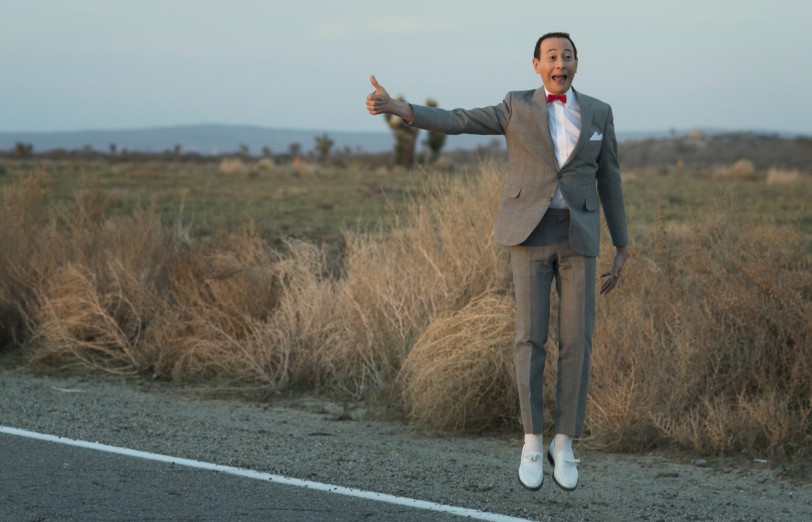 It takes a certain type of person to love Pee-wee Herman.  That type would be those who also love the Three Stooges, who are well-connected with their inner child, and who don’t apologize for their strange sense of humor.  I respect those people, but I just happen not to be one of them.  I actually wasn’t allowed to watch Pee-wee as a child; I guess my parents thought he was crude or weird or something, and we all know about the trouble Reubens found himself in years later.  So I never experienced his comedy when I was young, never looked into it when I got older, and never thought I’d watch one of his wacky films.  But I gave this one a shot, hey why not, and what I found out was an affirmation of what I had always suspected; that it takes an unusual individual to love this unusual individual, which just so happens not to be me.

Pee-wee has never left his small hometown of Fairville.  He’s comfortable there, knows everyone, has a good job, lives alone, has a routine, and has no idea what might be beyond the city limits.  But, one day, he meets an exciting man named Joe.  The two are an awful lot alike, enjoy the same things, finish each others’ sentences, the whole lot.  But Joe loves the city, the open road, danger, adventure.  He counsels Pee-wee to live a little, to leave his comfort zone, to experience all that the world has to offer, starting with Joe’s birthday party in New York City.  So Pee-wee takes a chance, loads up his car, and heads out on the highway.  Little does he know that he’ll see more than he ever imagined: giant snakes, bank robbers, mountain men, the Amish, crazy farmers, and so much more, as he hits the road on the journey of a lifetime.

I spent most of the movie chuckling to myself, wondering what in the hell was going on.  It wasn’t like the humor was foreign to me exactly, it was more like it wasn’t humor at all, but rather any thought that went through Paul Reubens’ head spilled out onto the screen.  Not only was it not funny, but it wasn’t even a true attempt to be funny; it was like he didn’t care what happened next.  Maybe that’s his style of comedy right there, but if so, count me as someone who just doesn’t understand it.  I did laugh uproariously at one scene, when Pee-wee made a balloon make funny sounds for about 5 minutes straight.  The shear audacity of that scene cracked me up, and I guess I can see how that theme played throughout the film, how Reubens did what he wanted regardless of how little sense it made.  But I can’t say I liked the film, not it any way, and I found it a complete waste of time.  If you already love Pee-wee I can only assume this is more of what you grew up with, but otherwise stay far, far away.