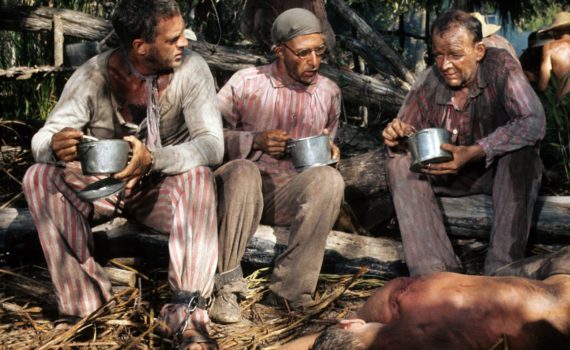 FJS has an underrated filmography that escapes notice only because it’s rather small as well, but the projects he was a part of are all undeniable: Planet of the Apes, Patton, Papillon.  He died in 1989, but he left a lasting mark, having helped to sculpt the late 60s/early 70s into the cinematic vision we now look back on in awe.  At least I do; I’ve always loved the lack of speed and abundance of experimentation from this era, as filmmakers played with what was possible and what audiences would accept.  In that way, Papillon was a trailblazer, pushing boundaries and taking risks, while sticking to the deliberate style of the times.  I grew up loving this period, and this film in particular, as it showcased all of what was best about movies, and all they could someday be.

Accused of a crime he didn’t commit, a Frenchman nicknamed Papillon for the butterfly tattoo on his chest is taken to the infamous penal colony in French Guiana to serve his time.  Hard labor awaits him amid the crocodile-ridden and malaria-invested swamps of the colony, and Papi knows that his only chance at survival lies in escape.  Among his fellow prisoners is infamous (and very wealthy) counterfeiter Louis Dega, who hopes to buy his way out of jail, but needs to survive long enough to do so.  The money he swallowed is simply begging to be cut out by an opportunistic thief, so he and Papillon strike a deal; protection for Dega and a funded escape for Papi.  The two become close allies and friends as their stay at the colony, in solitary confinement, and on Devil’s Island grows longer and longer.  As their hope dwindles and their bodies age, each man will have to accept his fate, or go mad trying to fight it.

I wish I had been alive to experience these films as they were being created, to see the trial & error firsthand and to watch these stars make their marks.  Schaffner would never do better than his core trio of films, McQueen was a legitimate action hero, and Hoffman was the talent to lean on whenever needed; no wonder this movie worked so well.  It was nominated for its score at the Oscars, but I think Hoffman should have gotten a nod for Best Supporting; he is incredible as Dega.  Perhaps he’s just in the movie too little, which is a mistake, because he makes it, and he makes McQueen seem better, since he’s not naturally a wonderful dramatic actor.  The scope of the film is great though, as are the side characters, and the brutality you experience right alongside these men is something you’ll never forget.  A little experimentation, a solid pace, great music, and an unforgettable story; Papillon is a classic from whatever direction you look at it.