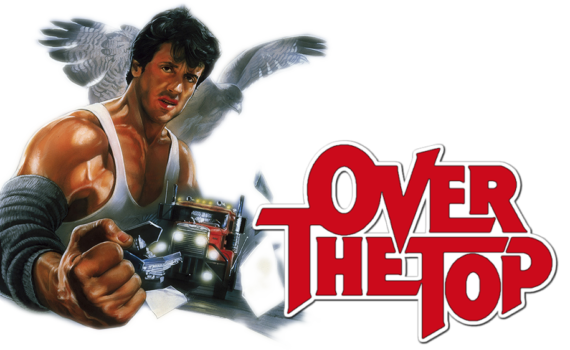 Watch the openings credits, listen to the cheesy 80s theme song, and tell me Over the Top isn’t the best movie ever made, I dare you.  By ‘best’ I mean so bad that it comes full circle and becomes amazing against all logic, but same difference; either way this ridiculous gem is something that you need to see, if just to say that you watched Sly Stallone pretend to be a professional truck driver/arm wrestler once in your life.  Seriously, that’s the plot, and it only gets worse from there, that’s only the base; the devil is in the details.  But watch on a lonely night, allow yourself to laugh, and you’ll come away shaking your head in what, hopefully, will be a fun way.

Trucker Lincoln Hawk is also an arm wrestler and a dad, in that order.  He abandoned his wife & son years ago, but has regretted it every day since, as he drives American highways looking to make a quick buck with a random muscle match in a roadhouse honky tonk.  When his son Michael finishes a year at military academy, Hawk is there to pick him up and drive him to see his dying mother, against Mike’s grandfather’s wishes.  He’s a rich and powerful man, doesn’t want his grandson having anything to do with a scoundrel like Lincoln, and will stop at nothing to keep them apart.  But father & son have some bonding to do and an international arm wrestling competition in Vegas to win, no matter the odds.

It’s as bad as it sound.  Sly is this quiet tough guy who just loves his rig and his rassling, Michael is this spoiled kid who has a lot to learn, and of course since it’s an 80s movie there’s an angry rich white man trying to mess everything up.  My god, so terrible, and yet so perfectly lovely as well.  The opening song is so cheesy, so stupid, that you can’t help but love it, and it just goes up/downhill from there.  Lessons about life, bonding, escapes, giant bruisers named Bull; magic.  And at the heart of it all, there’s Lincoln Hawk, who’s name, no joke, switches back & forth to Hawks with an S for no reason over & over again throughout the movie; it’s maddening, and it’s just another sign of how little work went into making this movie a real film.  Watch solely for entertainment; it’s not worth anything else but shock value and guffaws, but that’s not nothing.