Movie Review – One Night in Miami 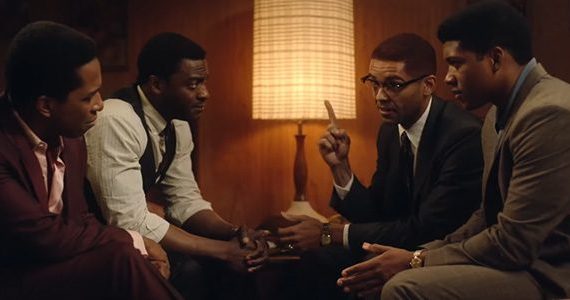 Movie Review – One Night in Miami

Regina King’s directorial debut mostly draws upon the work of others, which is not the worst thing an amateur can decide to do when the world is watching your first time.  One Night in Miami is a play by Kemp Powers, and Powers adapted his own work for the screen, and four actors took on the bulk of the plot; sitting in a room, talking about the world, portraying four icons.  Maybe it was simply a great way for a director to get their feet wet, because the material was already there, the adaptation was delivered, and the cast pulled off the ploy, handing audiences a film that felt like theatre but lost nothing important in the translation.

On the evening of Cassius Clay’s title fight, he and three friends gather to celebrate his victory and his success, to celebrate all that each of them has accomplished on a road to fame that has not been easy.  Sam Cooke has taken gospel music and made it appealing to the white masses, turning himself into a rich man in the process.  Jim Brown has become the greatest football player the world has ever seen, setting records and making himself a household name.  And Malcolm X, outspoken figurehead for the Nation of Islam in America, has the entire country listening to his every word.  But the friends are not simply gathering for a drink after a bout, they are spearheading a fight against problems that Black people encounter on a daily basis in a fluid United States, using their wealth, power, and voices to somehow make a change that will somewhat last.

The theatrical aspect of this film is obvious and paramount; the best parts are in the hotel room with each character challenging the other, getting heated and passionate about the subject of saving lives.  It’s an incredible narrative, and you feel like you are sitting in the front row, watching events play out of stage.  The other parts, any time they step outside, that gets silly, it’s not strong, but luckily it’s not very much of the movie.  Most of the conversations are brilliant, and well-acted all around; they will set your heart pounding with a desire to do something now.  King can’t exactly be rewarded for setting this all into motion, the film was a vehicle all its own, with four excellent performances propelling it forward, but, again, she can’t be blamed for letting it run either.  She’s an amateur, she did the right thing, and the movie worked; that’s all we should ask of her for now.  Ben-Adir led an incredible, tense 110 minutes, pushing us to the edge and giving us insight into this historical figure.  And just because this is a fictional account, that doesn’t mean it doesn’t have true substance, and that doesn’t stop it from being one of the best films of this past year.