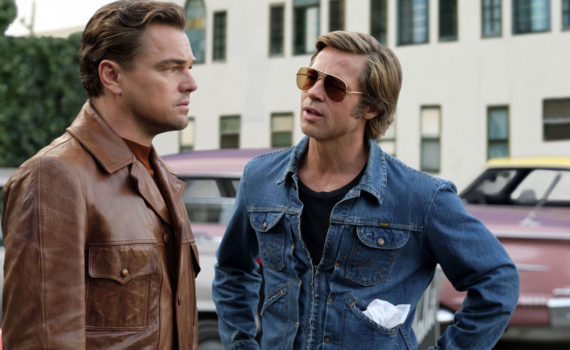 Once Upon a Time in Hollywood might be Quentin Tarantino’s worst movie and it’s still better than 70% of all other movies ever made.  That’s what we expect from, and what is always delivered by, this genius of the art form; superior films and excellent storytelling.  Even when the product isn’t perfect, we can still easily see the talent behind it, as Tarantino’s is unarguably one of the strongest voices we’ve ever heard in this convoluted industry.  You may not like all the blood, you may not like all the characters, but you can’t deny the power of his pictures, as they land in our laps one by one and demand our attention.  Again, this isn’t even one of his best, it might even be at the bottom of the list, but it still packs a punch, especially at the end, and you still have to see it, especially if you ever want to show your face around a group of cinephiles again.

Imagine visiting Hollywood in 1969 and stepping into the shoes of a fictional, washed-up Western star as he navigates the autumn of his career with his stunt man/best friend and lives next to the rising star and imminent victim Sharon Tate.  Now stop wishing, because Quentin Tarantino will take you there, at least to his vision of there, with pieces of his patented style and elements of alternate history mixed in.  The Western star is Rick Dalton, a once-famous cowboy who can now get no other role than Aging Villain.  His buddy is Cliff Booth, a stunt man who has seen younger days, and whose fate is tied to Rick’s for good or evil.  On the periphery is Sharon Tate, a young actress on a meteoric rise who is married to Roman Polanski, will soon be having a baby, and has her whole life in front of her.  Paths converge and the future is uncertain, as all players face the unpredictable nature of a fickle industry and the unnerving, chaotic nature of mankind.

I’m not going to make a Top Tarantino list, we all have some we prefer over others, but I will say it one more time; Once Upon a Time in Hollywood is in no way one of his best.  He sacrifices his own, weird, wild, often shocking touch to do something a little different, and that’s fine, that’s great, that’s still better than most movies, but it isn’t a film that can stand next to perfection like Inglourious Basterds and Django Unchained and claim to be as stunning.  OUATIH is simply an alternate style, and it’s also one that’s mostly boring for two hours, before it succumbs to Tarantino Town late in the story, which both makes the last portion excellent and raises questions as to why the rest of the movie wasn’t as good.  For the majority, we are transported to old Hollywood, left to sit inside the cars, listed to the music, see the clothes, smell the hippies, experience everything the era has to offer.  But we aren’t afforded much else, other than a few cools scenes to showcase DiCaprio and Pitt in their element, acting their asses off, which, honestly, didn’t happen nearly enough over the entire run time.

Counter point to …myself; the lack of excitement throughout lulls audiences to sleep, allowing the excitement at the end to be all the more impacting, which may have been what Tarantino had in mind all along.  The last 15 minutes crushes, is hilarious, is a bit of a twist, and makes you look back on all you’ve just watched and say, “Huh. I guess that was all buildup. And it was kinda fun. Huh.”  So maybe it wasn’t a complete disaster, maybe it was intended, which makes it more interesting in reflection, but still didn’t make those two hours of my life very fulfilling.  Although, how much can you really complain watching this cast do anything: DiCaprio, Pitt, Robbie, Margaret Qualley, Emile Hirsch, Timothy Olyphant, Dakota Fanning, Bruce Dern, Luke Perry, Damian Lewis, Al Pacino, Maya Hawke, Scoot McNairy, Kurt Russell, Michael Madsen.  It was a walk done memory lane as far as actors and plotlines were concerned, and the biggest bonus may have been the feel good ending, which you will not see coming.  Weighing out all the emotions viewers will leave the theatre with, I hold firm that this is a good movie, even a great movie, without quite reaching the standard we’ve come to expect.  It was often self-indulgent, self-congratulatory, over-shot, and showoffish, but there were also many key moments of magic, with a finale that works perfectly, so how much can you really complain?