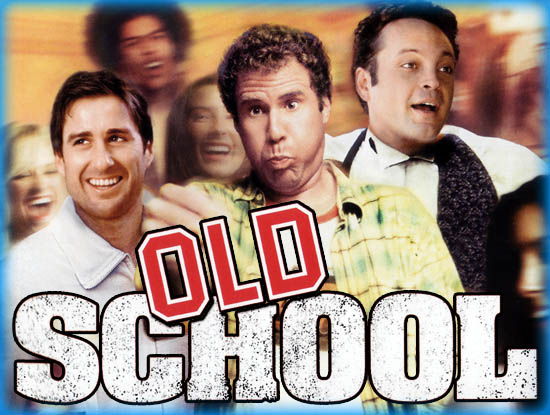 Old School is probably the best of this generally ridiculous genre of mostly inappropriate movies.  Wedding Crashers, Dodgeball, Stealing Harvard, Orange County, Accepted, Role Models; the list goes on & on, with each one dumber than the next, but, really, Old School might be one of the funniest and most memorable of the bunch.  That doesn’t stop it from being fairly bad and just plain wrong, but the lines that came out of this film, the bizarrely memorable moments, those are at least worth honoring, even if the rest of it is better left forgotten.

Mitch hates his job, his girlfriend is cheating on him, he’s gotta move out, and things are spiraling out of control.  At least he’s got good friends; well, actually, terrible friends, but they are definitely loyal and love him, even if they have odd ways of showing it.  Like how one of them starts a pseudo-fraternity out of Mitch’s new house and makes Mitch the Godfather of some twisted boys club, that’s pretty weird.  And yet, it enlivens him in an odd way, and shows him what camaraderie is really like, and maybe even helps him move on from his crappy life toward something much better.

So, Mitch has sex with a high school student, a gay character clutches every single stereotype, an overweight character is played for laughs, and generally most of the plot would be immediately torn up and flushed down a toilet were it read for the first time today.  Putting that aside, if you can, because this movie came out 20 years ago, Old School has funny pieces that have become iconic, and that’s worth something.  Come to think of it, all the good stuff comes fro Will Ferrell, because of course it does, and that’s really all we need to remember about this silly film.  He’s great, the rest of the cast is weird, only frat guys will really fall head over heels, and the rest of us can be fine with remembering some good laughs and moving on with our lives.