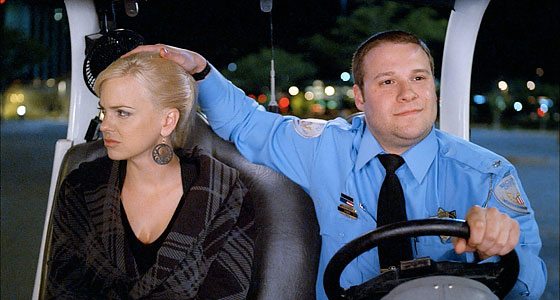 Although Seth Rogen and Danny McBride often meet up in the movies, I think they represent two distinct styles of comedy that you’re either a fan of or you hate, and I happen to love Rogen, while I can’t stand McBride.  Jody Hill is the director who matches with McBride’s humor, works with him often, and if that’s your thing then more power to you, but it isn’t mine, which is why I can’t gush over Observe and Report.  It’s funny, Rogen is funny, some of the ideas are funny, but mostly the movie simply comes across as coarse and stereotypical, not original like Superbad or completely off the wall like This Is The End.  It has its moments, there is some cool comedy , and maybe I needed to watch it ten years ago when I was younger, but I see nothing special here other than an improved Paul Blart ripoff.

Ronnie wants more than anything to be a cop, but he’s currently only mall security, a job he takes way too seriously as he waits for his chance to make it big.  Some recent crimes have demanded his attention, and he’s so ready to face them head on & to make a name for himself.  First, a flasher shows his goods and then runs away, next a robber hits a shoe store, so there’s a chance for Ronnie to make a splash, if only the real detectives would get out of his way and let him get to work.  Also, on a personal note, Ronnie is in love with a makeup counter girl named Brandi, who isn’t the kind of lady you take home to mama, while the lovely Nell pines away without him even noticing.  A lot to maneuver, and Ronnie isn’t the brightest bulb, but sometimes you just get lucky; other times you fuck everything up and get fired, so.

Seriously, Paul Blart came out a few months before Observe and Report, one of those weird times of film dichotomy, which doesn’t make the latter look very good, even though the former was a complete flop.  Hill & Rogen were able to improve upon the concept, that’s for sure, but they still weren’t very original, and not all that clever either, resulting in a few laughs but nothing more.  I found the first half far more appealing than the second, as everything witty came early, and all we were left with by the end was an odd storyline and not enough talent to pull it off.  Also, the more you hear these jokes the more offensive they become, so I grew tired of the comedy quickly, and started to wonder if I should be laughing at all.  But I did, it’s a goofy romp, nothing more serious than that, Rogen is a natural, Faris is good too, this movie simply won’t go down as must-see cinema.