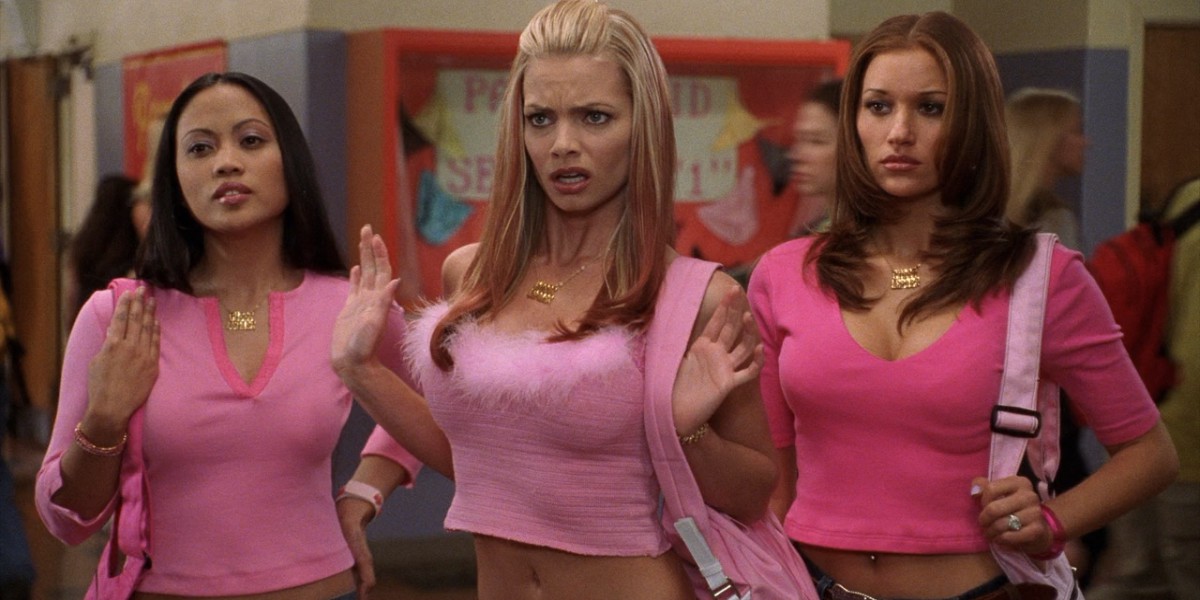 If you didn’t live through the American Pie era, you just won’t understand; Not Another Teen Movie might make fun of the 80s too, sure, and of 90s chick flicks too, yeah, but the main target is definitely teen romps where every joke is sexual, every character ridiculous, every problem imaginary, and every house party a chance to chug beer, jump in a pool, and see someone’s boobs.  I graduated high school the same year this movie was released, so I feel its point very deeply; I not only watched the films it mocks but I also lived the lives it generalizes so fluidly, until you can’t tell whether it’s exposing or spoofing; maybe a little bit of both.  If it seems like I’m gearing up to call Not Another Teen Movie a surprisingly cerebral representation of the times, pump the brakes, because it’s really mostly stupid.  But it does get a lot right about both teenage cinema of this time and what it meant to be a teenager of this time, so, hey, credit where credit is due.

At John Hughes High School, you stick with your clique and you don’t throw a fit.  Life is about being the stereotype that you were born to be, and that should be enough for any pubescent, stop your belly aching.  Janey is the artistic, liberated, intelligent loser, who is also really, really ugly; she not only has a pony tail, but she also wears glasses!  Jake is the popular quarterback with the letter jacket and the trophies who can get any girl he wants, especially now that the ultra-princess Priscilla has dumped him for the weird, edgy kid with the handheld camera and the floating bag.  Jake thinks he could get any new girl he chooses, making her instant Prom Queen material, but his friends think otherwise; they challenge him to turn Janey into a popular goddess and to get her to go out with him, a seemingly impossible task that just might lead to true love.

Not Another Teen Movie spoofs often and it spoofs hard; think Scary Movie, but for coming-of-age flicks, especially of the 80s & 90s.  I’m sure there are a thousand more, but the ones that stand out to me or are just plain obvious are She’s All That, American Pie, Ferris Bueller’s Day Off, 10 Things I Hate About You, The Breakfast Club, Varsity Blues, Pretty in Pink, Bring it On, Cruel Intentions, Never Been Kissed, Fast Times at Ridgemont High, Lucas, Can’t Hardly Wait, Grease, and more beyond count.  It’s a goofy gaff of insults and insinuations, a comedy that’s mostly funny because of the films we’ve already seen, but with a few real humorous moments that do make the movie something of a stupid gem.  Priscilla is my favorite, so perfect, and I also love Ox because his impression is so spot on.  I could do without the character who wants to be Asian, the “token black guy”, the naked foreign exchange student, and other references like that which might not fly the same today as they did almost 20 years ago.  But the rumpus as a whole is at least memorable, and so is the cast: Chris Evans, Jaime Pressly, Lacey Chabet, Ed Lauter, Paul Gleason, Mr T, Randy Quaid, Molly Ringwald, Josh Radnor.  It’s silly, it’s sloppy, it’s dumb, but you don’t much mind; Not Another Teen Movie is fun for those who understand the inside jokes, and holds up fairly well, if a little more insensitive then I remember and perhaps with too many poop jokes.