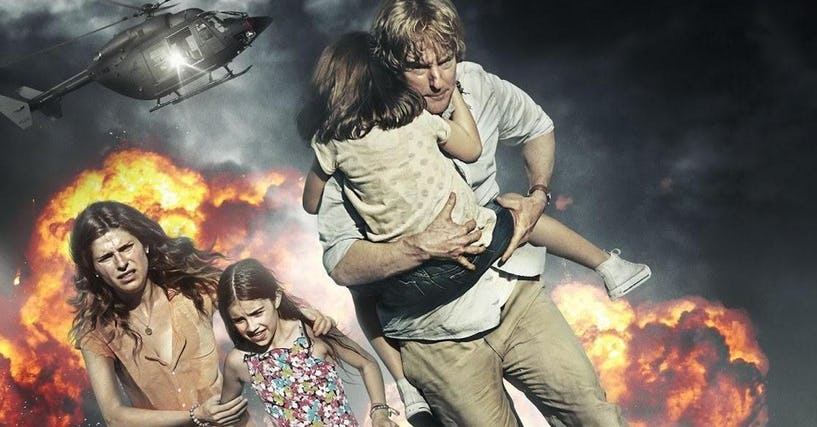 I’ll admit that it’s rare, but my predictions about this movie when the trailer was released were exactly accurate.  It’s not as good as the Ray Liotta movie by the same name, Owen Wilson’s nose actually looked smaller for some reason but his minimal action talent remained the same size, Dowdle wasn’t able to direct a thriller that felt like real life, Lake Bell is awesome but couldn’t pull off The Impossible 2, and Pierce Brosnan, apart from having a silly name, played a silly character that they cut out of a cardboard box & forgot to flesh out.  Basically, everything you could imagine going wrong when you imagine what this film could be is exactly what it turned into.  So give yourself some credit, predict a failure, and turn away before you’re sucked in.

Moving to Southeast Asia for a new job opportunity wasn’t exactly what Jack Dwyer had in mind when he started his own company, but sometimes startups go belly up and sometimes you have to take the corporate gig.  So off he & his family go to the steamy jungles and crowded streets of a city in a fourth world nation, his wife Annie upset with the move, his daughters Lucy & Beeze just wanting to go home.  Things are about to get even worse than no internet, no phone, no TV, no newspapers; the Dwyers have unknowingly landed in the middle of a civil war.  With the Prime Minister killed, the people of the city rise up, and the target of their anger is Jack’s company, a Caucasian takeover if ever there was one.  Now he & his family must survive the day, get out of the hotel, make it to safety, while complete chaos reigns all around them.

This story actually feels a little racist at first, painting an un-American nation as violent and barbaric, with the nice white people fleeing for their lives.  They do add a bit more to the plot, make it a little more complicated and a little less finger-pointy, but the general feel is one that will rub some audiences the wrong way.  Maybe most people won’t care, maybe I’m being sensitive, it’s hard to tell.  Regardless, the movie itself isn’t good enough for you to go wading in hoping for a surprise.  Wilson just isn’t this type of leading man, he just can’t do it.  Lake Bell tries her best, and really, I dig her.  She’s smart, multi-talented, naturally funny, and really at ease with her sexuality; her part was simply written too poorly to work.  Pierce Brosnan didn’t help, his character was a dumb show, and the film’s only real saving grace was the way it made me feel about the kids, how much I wanted them to be OK.  No Escape is a throwaway movie, which is disappointing, because why waste everyone’s time?