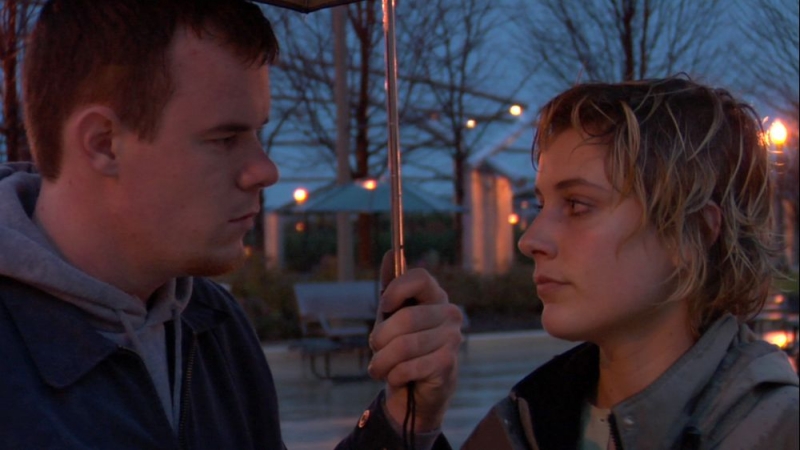 Gerwig, Swanberg, and the Duplass Bros. have been connected since the beginning, and it’s been nice to see them all find success in different ways.  Gerwig is a big-time director now (Lady Bird, Little Women), Swanberg had a whole slew of organic features (Drinking Buddies, Happy Christmas, Digging for Fire, Win It All, Easy (TV series)), and the Duplass Duo has done too much to list; indie films, TV, producing, directing, writing, starring.  This is a super-talented team, I hope they are all still friends, and it’s nice whenever two or more of them come together.  Nights and Weekends features Gerwig & Swanberg collaborating in every way, this is their co-project from every angle, and, considering how young and inexperienced they were at the time, it’s wonderful how well it all works.

Mattie and James are in a long-distance relationship, and it’s not going very well.  She lives in New York, he lives in Chicago, she flies out to see him, they spend some weekends together every few months, but it’s getting harder and harder to be apart, as their lives pull them in different directions and the miles become much longer than they used to seem.  Mattie is fun-loving, talkative, flippant at times, James is sensitive, more reserved, and thinks love is fragile; in many ways they aren’t suited for each other, but they are drawn to each other nonetheless.  Breaking up might be even harder than staying together, because seeing themselves as anything other than boyfriend and girlfriend might be too much to ask, as they attempt to go their separate ways but find themselves right back in each other’s arms.

Greta Gerwig is the radiant star of this off-beat rom/com, and that’s fine by me.  She’s lovable, relatable, goofy, and then surprisingly deep, like she can turn in on in an instant and you’re like “hahaha oh no wait”.  She’s got a gift, for acting and for storytelling, and they both are on display here, though the amateur/indie/low-budget/improv-y feel may make audiences assume that the content will be much less exciting than I am building it up to be.  In fairness, this is an odd movie, nothing really happens, there aren’t really other character in it, it’s just two souls who’ve met, we get to watch them, they move apart, we get sad, and that’s about it.  But in between the lines is a fair amount of being-said-without-saying-a-thing, and Gerwig is good enough to get us to watch her just sit there and stare dreamily out a window; I would pay to see that.  Swanberg isn’t a terrific actor, but even his role grows on you after a while, and you start to feel invested in this doomed couple, you begin to hope that something might work out.  The production value is low, the sex is pretty voyeuristic, there are parts to this film that the average movie-goer isn’t going to like, but I think if you can peel back the outer layer there’s something sweet inside this story that deserves our attention.