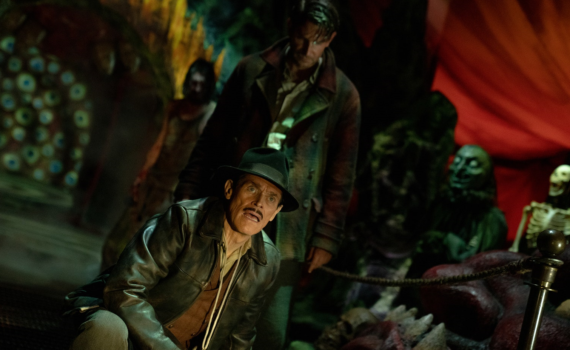 First a pulp fiction novel, then a noir film, now an Oscar contender; Nightmare Alley has had quite the ride.  This Guillermo del Toro adaptation looked to be less twisted than the director’s previous works, with no creatures and no fantasy, just a sad tale with bizarre characters.  But I am here to say that it is no less dark than del Toro’s norm, no less devious of plot and challenging of theme, no less spectacular.  For, while I continually put this movie off because I didn’t like the look of it, I was proved wrong when it succeeded in every facet I feared it would fail.  Not only is it an Oscar contender, but it should be considered more than worthy of Best Picture, over any competition thrown its way; this film is that good.

Stan stumbles onto the fairgrounds fresh off a bus, running from a past he’d rather leave behind.  No bother, so many on the road these days are escaping something worse with little hope for better, as the Great Depression comes to a close, America gets ready for another Great War, and bums roam the railways with no particular place to go.  Stan has prospects though; he’s still young, he’s whip smart, he’s very handsome, and so he finds himself taken in by a traveling carnival troupe, learned the tricks of the trade until he can do them better himself.  With that thought in mind, and with the lovely Molly in tow, Stan heads to the big city to become Stanton Carlisle, mentalist extraordinaire, secretly a cheap hustler who wants to leach the rich of their earned wealth.  Teaming up with psychologist Dr. Lilith Ritter, he sets out to do just that, fool powerful men into giving him parts of their fortunes, until fortune turns on Stan and he is left so far in over his head that he may drown in his own imagined powers.

I really did put off watching this film, mostly because I simply thought it looked poor.  I love del Toro, this cast has everyone you want to see, I just didn’t like the look/feel of the trailer/advertising; I thought maybe it was audiences who were being hustled.  But I am overjoyed to announce that I was wrong; Nightmare Alley is a tremendous achievement of entertainment and insight, one of the very, very strongest of the entire year.  Not only does the cast do a phenomenal job bringing this creepy tale to life, but every scene is a masterwork, every song, piece of furniture, costume, angle, and bit of dialogue ring true, real, and dramatic.  This story will have you wide eyed examining the deeper meanings, its pace will have you on the edge looking for more, and the end will hit you with a force you didn’t see coming; how many movies can claim that?