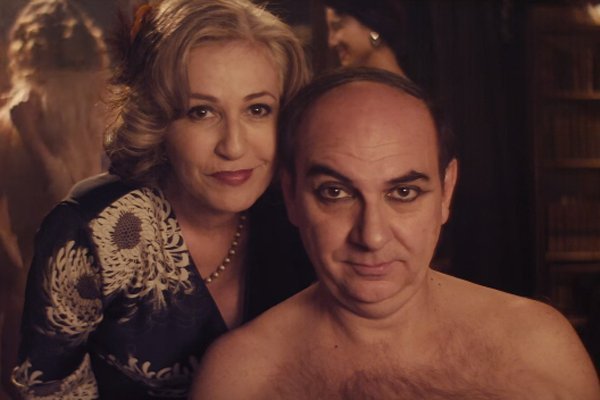 What a year for Pablo Larrain.  First, he makes a film in his native Chile about Pablo Naruda, then he makes an American film about Jacqueline Kennedy.  The latter, Jackie, might be up for Best Picture and will assuredly gain Natalie Portman a nomination for Best Actress.  The former, Neruda, could enter into the Best Foreign Language Film category, where I doubt it wins, but hey, recognition is recognition.  2016 is shaping up to be a strong year for Larrain, and awards aside, both his films deserve their fair share of credit.  I may have liked Jackie more, but Neruda has its strong points as well, a true story with a bit of the poetic thrown in for flare, the result being an artistic biopic that’s at least atypical.

Pablo Neruda, the famous Chilean poet and Communist agitator, the myth, the legend, the man.  Post-WWII Chile was in an uproar, its President rounding up political agitators, Reds gathering together in secret, the outspoken Neruda leading the charge.  He was the voice of the people, a man who represented the working class, although he was fat, fancy, and a frequenter of expensive brothels; not really in touch with the populace perhaps, but at least his heart was in the right place.  When his arrest was issued, Neruda would go underground, leading the police, including head inspector Oscar Pulechonneau, on a merry chase throughout Chile, and eventually over the Andes to wild, lawless lands.

Neruda is rather short, sweet, and simple, and that ends up saving the day, because the subject matter isn’t all that exciting.  It’s a piece of history, it’s an odd story, it’s one that, looking back, seems one-sided, but it isn’t extremely captivating, more semi-interesting than anything else.  His poetry is beautiful, the man himself was curiously strange, and watching the inept police chase this figure through history is at least mildly fun.  The film itself tends to be boring, with whispered narration and very few events.  If you’re looking for Larrain’s talent to be on display, watch Jackie instead, and keep an eye on how historical events are turned into horror scenes, that’s where the magic is, not here in a Chilean film that is good but doesn’t have the ceiling to be great.