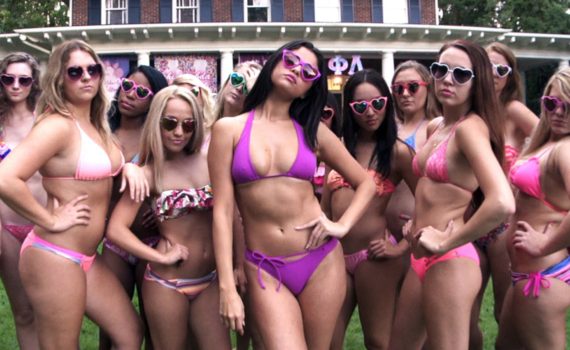 The original Neighbors definitely deserved a solid sequel, but Sorority Rising is definitely not it. Looking back, I’m not sure what I thought they could duplicate after such a strong first film, and even as recently as in the theatre to see this movie I thought to myself, “they had better just copy the other one, that might be the only way this works.” Well, I guess it’s true, lighting doesn’t strike twice, and sequels suck. Neighbors was raunchy, wrong, crass, pushed the boundaries, but always played for laughs, always knew it was being incredibly too foul, and always relied on a surprisingly lovable core of characters to see it through.  And while those characters might all be back, they didn’t all bring their A-game, and the additions to the team basically brought the whole squad (and film) crashing down.

After staving off the fraternity next door, Mac & Kelly have decided to move anyway, now that a second child is on the way. They need a bigger house in the suburbs, have potential buyers lined up, and all seems well in place. But that was before a gang of psychopathic teenage girls moved in. A sorority has been established in the empty house, making the neighborhood unlivable again, and forcing Mac & Kelly to take action. But this time things have changed, because Teddy has switched sides. The needy, vacant, muscle-bound man wants to help his old “friends” shut down the sorority, and only he has the knowledge of how Greek life really works, having made his reputation on both throwing & annihilating college parties. Can they do it twice, or will it be twice as hard? It will be half as good, that’s the equation that becomes appropriate here. While Neighbors was shockingly funny, Sorority Row is mind-numbingly not. The crew is back, the jokes are recycled, the movie opens with an awkward sex scene, and you think that the successful recipe might just be followed well enough to turn into an enjoyable if not perfect sequel. Well, the returning characters & a few copied jokes are about all that works, and that not very far. Seth Rogen is still a likable, amiable, bumbling Jew with a wife who’s too hot for him, so I guess there’s that. Rose Byrne is still cute & clever, Zac Efron is still a fairly good comedian when stood up next to an established talent, and even the plot is pretty reminiscent of the original, bringing back the parties, the drugs, the war between houses and the adult humor that worked so well before.

So why wasn’t the end result the same? Why did the second falter where the first soared? If I were looking for someone (or a group of someones) to blame, I’d point a finger directly at the trio of sorority sisters who moved into the house in the first place. Every scene in which they dominated was so incredibly painful that I wanted to shut my eyes & ears in hopes that it would end soon. Chloë Grace Moretz (weird name by the way, and I should know) was a hot mess, and not in the same way as Selena Gomez, who was a hot mess, but emphasis on the word ‘hot’. No, Moretz was just awful, with a dumb psuedo-pothead vibe, a stupid half-feminist message that was laughable, and a pair of cronies in Kiersey Clemons & Beanie Feldstein who couldn’t act their way out of a paper bag. Don’t look for these girls in any good comedies soon, and don’t watch any more movies that Nicholas Stoller wrote (The Five-Year Engagement, Sex Tape, Zoolander 2) because apparently he sucks.