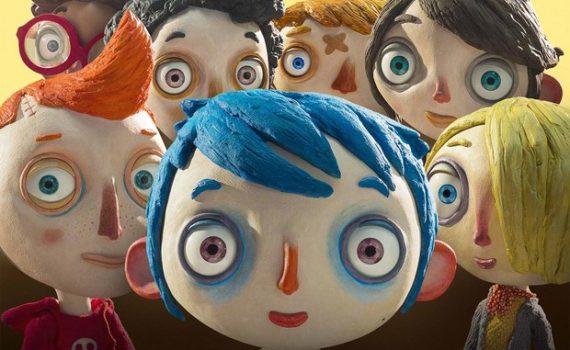 Nominated for a Best Animated Feature Academy Award, and coming in at only 70 minutes long, My Life as a Zucchini is as quick & impacting as an animated short, but as full of story & emotion as a feature presentation.  It’s a mix of the two mediums, falling directly in the middle in a very smart and specific way.  It didn’t take home the prize at the 2017 Oscars, but for a foreign film to be nominated in the category is no small deal, and should alert audiences to the fact that this movie deserves not to be ignored.  It’s a powerful statement packed in a small punch, but one you will feel the next day regardless.

Ikar, better known as Zucchini, lives with his abusive mother and spends most of his time daydreaming of superheroes and the height of the sky, anything that will transport him away from his miserable existence.  When his mother dies in an unusual accident, Zucchini is left in the hands of the French government, where a friendly police officer/social worker places him in a group home for children whose parents are no longer in the picture.  There, Zucchini meets a bully named Simon who will become his friend, and a girl named Camille who will become special in a way that he could never have imagined.

What a beautiful story to share with us, one of loss and the hope of finding something special again.  Most of the action is set at the group home, and these aren’t supposed to be little kids, they’re around 9-11, so their personal tales can be a little uncomfortable, and the questions they have about the world around them can be mature in nature.  So this isn’t exactly a kids’ movie, it deals with very adult themes, which just makes it all the more atypical and amazing.  The problems the kids face are so real and so frightening, and the way they work through them is perfectly believable.  An animated movie, yes, with great stop-motion footage, but it’s more than that, Zucchini is also a wonderful stand-alone film, a short but emotional experience from a great French filmmaker that you won’t soon forget.