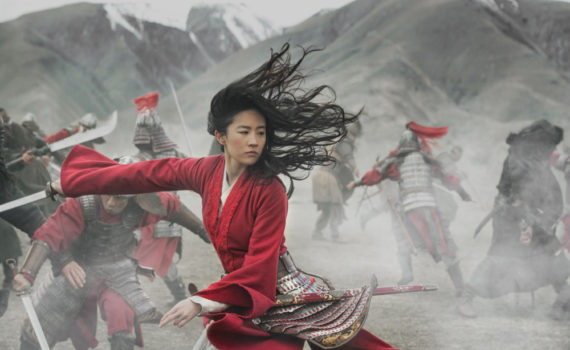 I am officially done with Disney remakes; fool me once, shame on you, fool me twice, shame on me.  Disney has fooled us all numerous times, with these god-awful re-dos of their greatest hits, these terrible live-action caricatures of films we grew up loving.  Every time a new trailer comes out I get a little excited, because I loved these movies, because the trailers look excellent, because the music hits, because, my god, it’s Disney!  But every time I leave disappointed, not because I expect something as tremendous as the original works, that’s not likely, but because I want to be entertained by solid cinema, regardless of where it comes from.  Mulan is just another bad cover by a washed up band, a song that once was great but now just feels tired.  And I’ll even go one step further; this may be the worst remake of them all, a copy so bad that I may actually head to myself and never watch another.

You know the story because Christina Aguilera sang it to you; Mulan doesn’t see herself in her own reflection, and she’s not sure who she is inside.  Her family wants her to marry to bring honor to the family, but Mulan is no graceful swam, at least not in a dress; fighting is another matter.  She’s a born warrior, a Chi goddess, can do things only a few can, but her destiny is held down under the weight of her gender; can it ever be truly revealed?  When war comes, Mulan famously takes her father’s place, but the stakes are much higher than she realizes.  Pretending to be a man is one thing, becoming a solider is not impossible, even defeating the evil Bori Khan can be done.  But what about the witch who fights at his side, this woman who has so much in common with Mulan, because she too cannot reveal her true powers?  This wrinkle will cause the whole empire to stumble, and only Mulan can save it from falling to its death.

There’s a lot to unpack here, a lot that’s gone horribly wrong and needs to be pointed at so that, perhaps, we never accept the same weak sauce again.  And we really shouldn’t; we ought not to be watching these movies, that’s the only way they’re going to stop, and stop they really REALLY should.  Mulan is the worst yet, for a hundred different reasons, but I’ll just stick to the ones that stand out the furthest.  Yifei Liu is awful, just awful, and I really don’t think she makes more than one expression the entire movie.  But the times she “comes to life” and does flying kung fu might be even worse; it was like those scenes were directed by a complete befuddled amateur.  I was excited to see the Crouching Tiger-esque fight scenes woven into this story, but that may have been the weakest part of the film, the stupid fantasy elements; at one point I involuntarily said “oh gosh” and averted my eyes in utter embarrassment.  It was childish, silly, ridiculous, dumbed down, just nothing I expected from a film that went out of its way to be PG-13.  Go big or go home, huh?  Don’t give us a couple CG moments and expect us to stand up to applaud.  And the rest was one huge mistake: the lack of comedy, the annoying witch story line, the awkward battle scenes, the unprofessional writing, some of the worse directing you will see from a film not just this year but any.  Mulan is exactly what you shouldn’t do, with a team of people who shouldn’t have been hired, with a lack of anything worth watching, especially since the original is so good and available to see on the same streaming platform; if it ain’t broke don’t fix it, Disney.