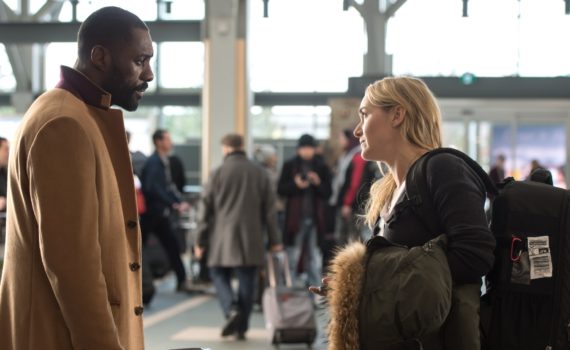 Talk about a power couple.  Winslet and Elba are two of Hollywood’s brightest stars, with the filmographies to back them up.  Winslet is a veteran, a professional, a pillar; call her whatever compliment you will and I’ll second the motion.  Elba is currently a hot commodity, a name on everyone’s lips, a new wave leading man; I’m glad we’ve seen him as often as we have lately, because he deserves the screen time.  This pairing was set up for success, was the driving force behind the film, and was the main reason anything positive came out of this movie.  But the problems lie in the details apart from the casting of the leads, which was quite smart, while the rest of the story is actually pretty dumb.

Alex and Ben both need to get to Colorado from Idaho as fast as they can, but their flights have been cancelled due to bad weather.  Alex is getting married, but was away finishing up a photo shoot and a story, an important topic she needed to capture before returning to her domestic life.  Ben was at a medical conference, but needs to reach an emergency brain surgery where his talents are desperately needed.  Neither can be late, so they charter a private plane together to get them over the mountains in time, before the storm hits and before they are late for their lives.  But an in-air accident causes the plane to crash, leaving the new acquaintances stranded on a mountain face, running out of food and time. As I said, Kate and Idris worked, it was the rest of the movie that ultimately let them down.  They can hold their own in any situation, even on top of a mountain fighting cougars and the cold, and even without a supporting cast to help the film along.  They have the talent to do it, I don’t think there’s any denying it, and they exhibited that fact here.  Elba was allowed to be British, while Winslet, humorously, was not, so we had one real accent and one fake, but Kate’s been around forever, she can pull off whatever voice she wants to.  The chemistry was good, I believed they began to fall for each other, I wanted them to make it out alive, and as actors they supported each other in every scene, so we couldn’t have asked for more from the duo.

But we were left wanting by the film itself, and there’s plenty of blame to go around.  First, the dialogue was oddly awful, with jittery conversations and nonsensical proclamations; nothing flowed smoothly or felt natural when it came to the script.  I especially didn’t like when the story took a romantic turn.  Not on the mountain, I can understand that drama, but toward the end the film continued past where it needed to, and the plot became very silly/predictable.  Perhaps it was Dermot Mulroney, who appeared out of literally a bathroom, only to stink up the screen.  He was terrible, but also exhibited bad choices by the director.  Abu-Assad can’t be given any credit for what went right, but probably should be blamed for a lot that went wrong, as the movie felt a bit out of control, like no one was stopping it from becoming cheesy, probably because they didn’t know how.  There are little things scattered throughout that could/should have been done better, but the leads saved the day, and the film as a whole is watchable, if definitely not applaudable.