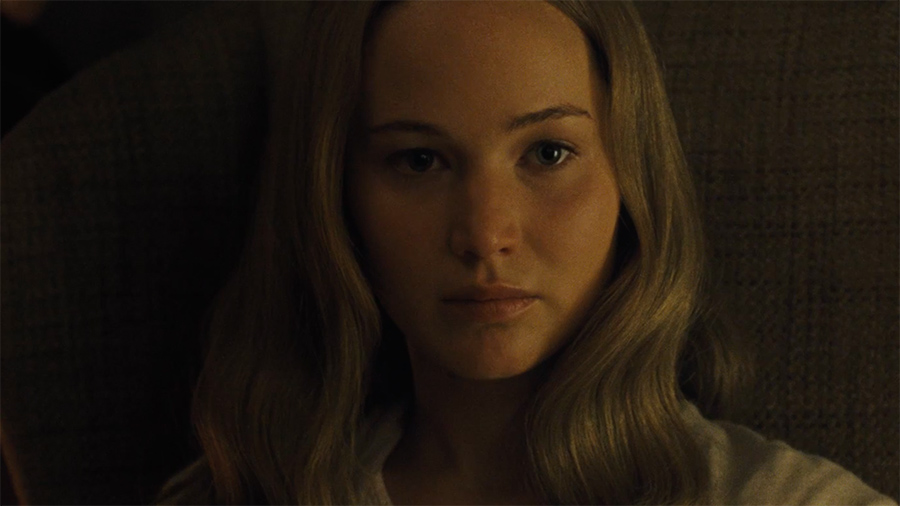 Aronofsky doesn’t fuck around, and so neither should we when we talk about his films.  Pi, Requiem, The Fountain, The Wrestler, Black Swan, Noah, Mother!; this is his filmography, these are some of the most deeply discussed and contested films of the last twenty years, the man is an unapologetic genius whose creations we don’t always understand or appreciate, but who should be someone we admire based on sheer unrelenting artistry in the face of an industry that can’t wait to squash it down.  For my money, Black Swan is his best, and actually I’d go so far as to call it one of the greatest cinematic accomplishments of the past two decades, as near to perfection as you are likely to get.  But he challenged himself with Mother!, a movie that goes far beyond the screen, the theatre, the audience, that pushes us down a  dark and desperate path into which we rarely peak.

A couple, who are living a secluded life by choice, enjoy each other’s company and their lovely house as the universe moves on without them in the chaos that is the outside world.  He is a successful writer/poet who needed to get away from it all to contemplate his next words, to mold his thoughts into the creation of something beautiful.  A fire gutted his family home some time before, destroying all that he had created, and he has been blocked ever since.  His young wife, much younger in fact, is rebuilding the home while he works, painting the rooms, choosing the decorations, carefully planning each detail of their future by listening to the house itself, feeling the color palette before applying the brush.  But their idyllic existence is disturbed when an abrasive couple drops by, a man and a woman who bring noise, disorder, and unwelcome guests.  He wants them to stay, she wants them to go, and no one is prepared for what happens next. Black Swan, Noah, Get Out, Enemy; those are the four movies that come to mind when I attempt to force Mother! into a box that will at least make it easier to transport, if it still cannot possibly contain it for long.  Black Swan for the visuals, Noah for the biblicals, Get Out for the comedic horror, and Enemy for the complete WTF moments you have multiple times throughout the viewing.  If a combination of those films doesn’t sound like something you’d enjoy, then you need to get as far away as possible from Mother!; it is the caustic cornucopia of many movies, and the willingness to go beyond them.  I saw someone describe it as “bonkers”, and I think that description fits; no one in their right mind would make/watch/enjoy this final product.  But that didn’t stop Aronofsky, and it won’t stop me; I loved every minute of it.

Here’s why, and I’ll start with an example to pave the way.  If you’ve read The Giver, you know that the meaning changes as you age.  When you were a kid, you thought it had a happy ending, when you grew up, you experienced something completely different.  And that’s how it is with Mother!, but with metaphors.  When I realized that the story wasn’t exactly going to make sense, I looked deeper.  At first I saw artistry vs the comfortable, manic vs structured, the battle between the two.  Then I was convinced that we were inside an artist, seeing his visions, watching the world attack him, never leaving him in peace.  By the end, the overarching allusion is plain to see, though I won’t point it out here in case doing so would be a spoiler.  But the metaphor isn’t tricky once you see it, it’s obvious, you just didn’t notice it at first.  Once you do, everything changes, and that’s when the magic happens.  Those looking for a JLaw horror flick will be sorely disappointed, even though she’s pretty great and there are some scary sequences.  That’s just not the point, Aronofsky takes us on a dark ride beyond that genre, weaves a theme that we didn’t see coming, and leaves us with more questions than answers.  You just have to want that result.