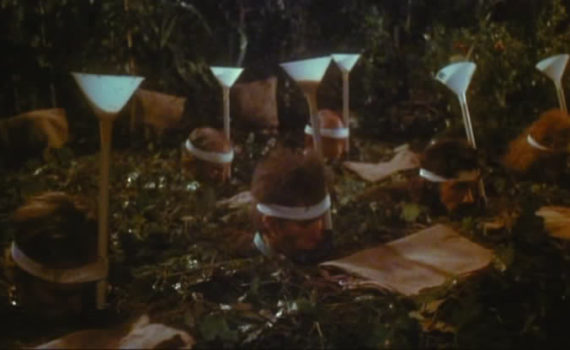 It’s easy to remember which movie was Motel Hell; it’s the one with the heads sticking out of the ground.  At least, that’s the visual that has always stuck with me ever since seeing portions of this film on television some foggy number of years ago.  Heads sticking out of the ground, and the bodies attached to them alive & well, trapped under the soul, grunting at two psychotic farmers whose motives are not harmless.  That’s Motel Hell in a nutshell, a 70s-vibe horror flick that’s one part comedy, one part Texas Chain Saw Massacre, and entirely ridiculous.  But that doesn’t stop it from also being a fun, campy, cult classic that I’m glad I watched in its entirety at least once.

Farmer Vincent’s Meats are the best for a hundred miles, smoked delicacies that defy the palette.  His secret recipe is a family heirloom, known only to he & his sister Ida, not even passed down to the youngest, Bruce, who happens to be a local cop.  Is that why Bruce isn’t in on the secret?  Perhaps, because something fishy is going on around the farm, and it sure ain’t bluegill.  People passing through keep disappearing and there’s something odd planted in Vincent’s walled garden.  So when a beautiful young thing named Terry finds herself at Vincent’s motel, it looks like she might be the next victim.  But love blooms in the strangest places, and she just might become successor to the family recipe instead of its newest ingredient.

What a very silly, very enjoyable late night gross-out flick that’s bound to be memorable to any who stumble across it.  Motel Hell is a little weird, a little sick, a touch goofy, and always entertaining, as one by one stranger and stranger characters find their way into Vincent’s garden.  Who ever thought this plot up is one wacky dude, but we as an audience benefit from something utterly out of this world.  The famous Wolfman Jack even makes an appearance, for some strange reason, but that only adds to the feel that literally anything can happen next.  A short watch without any effort required and with just enough dark humor to amuse those who love the genre, this is an off-the-wall classic that deserves a watch.